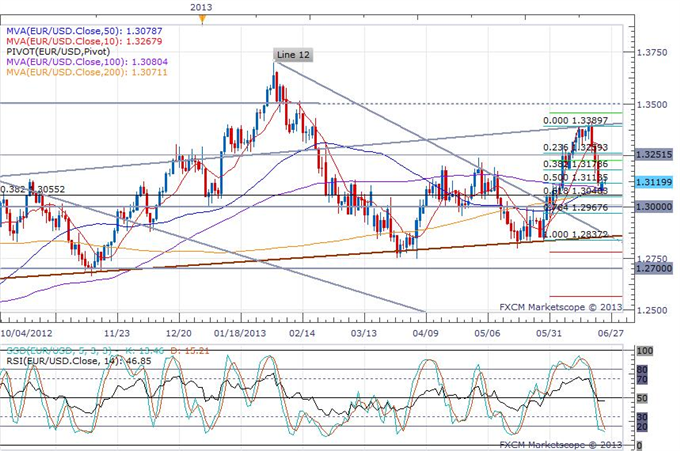 We’ve seen another session where markets are turning their attention to central bank guidance, but this time it’s not the Fed who’s responsible for the movements. In fact, the US Dollar is declining for the second day, as the effects of the Fed taper talk seem to finally be wearing off. Instead, a mix of comments from China’s PBOC, the BoE, and the ECB seem to be boosting risk appetite in the European trading hours.

A PBOC member finally spoke today following a recent rise in Chinese overnight borrowing rates. The markets seemed to be looking for an announcement that the PBOC will intervene to lower the rates, and PBOC member Ling said that the central bank will keep rates at a reasonable level and liquidity risk is controllable. These cool headed but ambiguous comments were strong enough to keep most of the gains in equity markets seen in the previous minutes, when the rumors of a PBOC press conference began to circle. The PBOC also announced that liquidity is ample and the money market fluctuations are temporary.

The Shanghai composite index erased earlier losses following the PBOC comments, and the index closed the day only 0.18% lower. Furthermore, S&P said today that it sees no macro impact from the Chinese bank crunch. The European equities also seem to be benefiting from the PBOC comments, and may have been further benefitting from anti-tightening comments among ECB and BoE central bankers.

ECB’s Coeure said a reversal of the current accommodative stance at the European central bank is distant and not this year, as economic growth is weaker and inflation remains below the 2% target. The Euro declined slightly from a daily high at 1.3150 against the US Dollar following Coeure’s comments.

The Pound also declined today after BoE’s Bean said there are no technical obstacles preventing negative rates and banks may reduce reserves in a long period of a negative rate scenario. Furthermore, BoE’s Dale said inflation will fall towards the central bank’s 2% inflation target over the next two years.

There were few significant economic releases during the European session. BBA reported that more than thirty six thousand mortgages were given in the UK in May, which beat expectations for only 33.2K loans for house purchases.

The Yen is beating the US Dollar the most in today’s session, despite the risk-on environment seen in the equity markets and the rise in the commodity currencies against the Greenback. The Euro and Pound are barely changed against the US Dollar for the day.