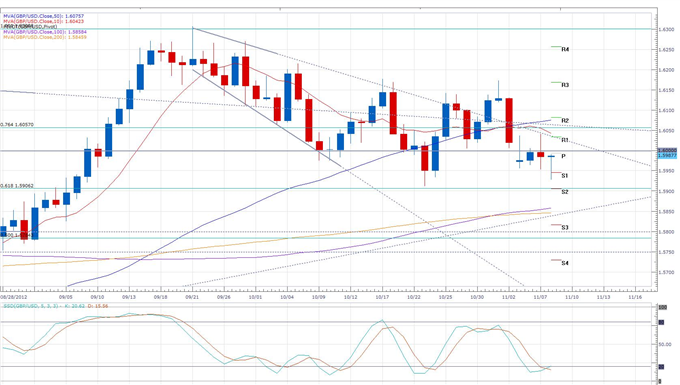 THE TAKEAWAY: BOE keeps a 375B asset purchase target and 0.50% interest rate -> Spending on QE is expected to end this month -> Sterling rallies

The Bank of England decided not to increase the asset purchase target in November, despite that the spending on the stimulus measure is expected to be finished by the end of the month. The asset purchase target was kept at 375 billion Pounds, as was expected by most analysts. The interest rate was also kept at 0.50%, which was also expected more widely by Bloomberg surveyed analysts.

Some Monetary Policy Committee members have been quoted by forex news sources as favoring other stimulus efforts besides for quantitative easing, like the Funding for Lending Scheme, which is currently providing extra liquidity for banks to lend. Also, the economy expanded by 1.0% in 3Q of this year, following 3 straight quarters of decline, and inflation is still slightly above the central bank’s 2% inflation target; higher inflation and growth are less encouraging for stimulus. No statement was released with the release.

Quantitative easing is seen as devaluing the local currency, and therefore the BoE’s decision to not increase the asset purchase program was Sterling positive. That is why the British Pound jumped 25 points against the US Dollar in forex markets following the release. GBPUSD climbed towards 1.5975 and could now find resistance by the key 1.6000 level. The monthly low at a 1.5913 could continue to provide support.

In other European news, French Finance Minister Moscovici said he expects France to maintain a 0.8% growth target for 2013. On other matters, Moscovici said that it’s urgent to reach an accord on the Greek debt deal. Greek PM Samaras just managed to pass the austerity measure in the Greek parliament; the austerity measure is meant to win the approval for the next round of bailout funds.

The German Finance Minister also spoke today, saying that the Euro is not the reason for the crisis in the Euro region. Schaeuble was talking at a panel in Hamburg; he added that the EU needs an institutional change and the German constitution may also need to be changed.

In just a few minutes, the ECB will announce the interest rate for November; they are expected to maintain a 0.75% rate. At 13:30 GMT, President Draghi will hold a press conference following the central bank’s monthly meeting. Investors may be looking to hear further details about the chances of enacting the OMT bond purchase plan, possibly as part of a larger bailout deal with Spain.