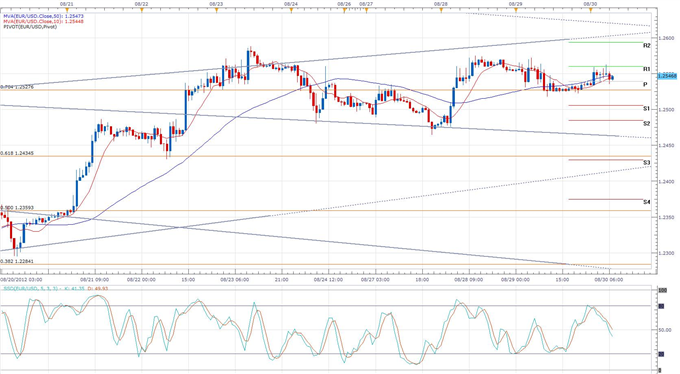 While predictions regarding the Euro and the likelihood of a Greek exit have varied since the beginning of the year, we now know of one investor who feels good about putting their money in the Euro- China.

Following a meeting between Chinese Premiere Wen and German Chancellor Merkel, Wen said he’s more confident about the Euro and will be investing in European bonds. The two leaders also signed various agreements for trades in Yuan/Euro.

Wen’s comments boosted the single currency at the start of the European session. EURUSD rose twenty points and past 1.2550 following the meeting.

However, today’s positive excitement over the Euro ended there. EURUSD barely moved for the rest of the session, until reports started circling that Merkel’s Adviser Feld said unlimited European Central Bank Bond purchases would violate the bank’s mandate. Earlier, German Economics Minister Phillip Roesler said a possible Greek exit has lost its terror, and the country must stand by its commitment. The EURUSD pair reversed most of its gains following Feld’s comments, and is now barely higher in today’s trading.

Meanwhile, European Commission President Jose Manuel Barroso’s optimistic comments about the EU and ECB being ready to do whatever is necessary were unheard by the markets. It seems as though investors want to see concrete details of a possible ECB plan, and positive sentiments are less than exciting. Barroso also said that the banking union proposal will be unveiled on September 12, and added that national supervision of banks is not enough.

Also, PM Samaras told members of his New Democracy party that Greece must avert a return to the Drachma. He said that the 11.5 billion Euro austerity plans will be the country’s last. The markets also remained unconvinced by the leader’s comments.

In other news, the price of Italian debt rose today during a sale of 5-year and 10-year bonds. 10-year bond yields dropped to 5.82%, from 5.96% on July 30; 5-year bond yields dropped to 4.73% from 5.29%. The amount of Germans unemployed rose by 9K in August, but the unemployment rate remained at 6.8%. Euro-zone economic confidence fell to a new 3-year low at 86.1. However, these did not have a significant effect on Euro trading.

Again, Bernanke’s speech at the Jackson Hole Economic Symposium tomorrow is the next big event that is likely to move markets.