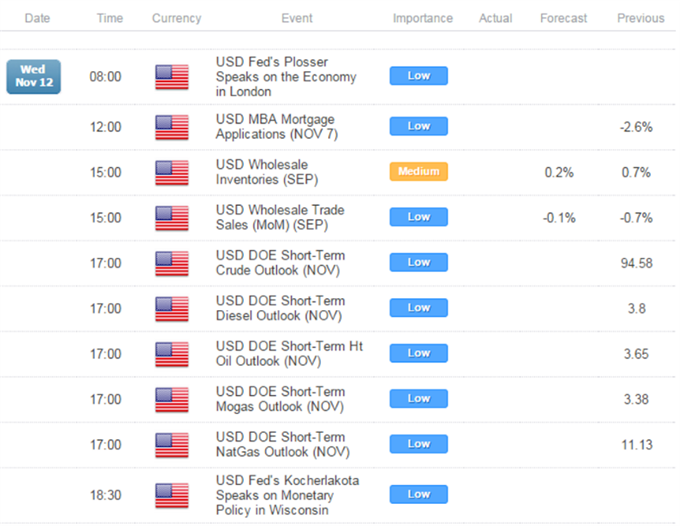 The precious metals rebounded across the board on Tuesday as their pricing currency, the USD slumped. A light US economic docket likely left the US Dollar bulls lacking inspiration, leaving the reserve currency exposed to profit-taking. Looking ahead, another void of major US data on the calendar could afford gold and silver some breathing room and a potential consolidation.

Meanwhile, the Brent benchmark slid to a fresh 2014 low in recent trade with its sibling WTI managing to hold above a technical barrier at $77 a barrel. The release of the DOE’s Weekly Petroleum Status Report has been delayed to Thursday, due to Veteran’s Day. Ahead of the figures global supply glut concerns may continue to linger, which could make a recovery for the crude complex challenging.

Also in the energy space; natural gas extended its declines on Tuesday as anticipation over a US cold snap eased. Recent storage injection figures for the commodity have been well-above the seasonal average. This suggests that in the absence of positive cues from weather speculation the commodity may vulnerable to a further pullback.

Finally, copper mounted a small recovery on Tuesday, yet is flat for the week. A string of top-tier data from its largest consumer, China, is set to cross wires on Thursday. Yet the commodity has been surprisingly despondent to recent figures from the Asian giant, which may leave it to continue its consolidation around the $3.00 handle.

Crude continues to whipsaw within the 77 to 80 trading band. While the proximity to the floor could see some profit-taking, the scope for a recovery may be limited by nearby selling pressure at the 80.00 handle. Further, trend indicators continue to point downward (descending trendline, 20 SMA, ROC). This leaves a close below 77 desired to open a descent to the next definitive level near the 2011 low (74.70).

Gold’s retreat from the 1,180 barrier has left a Morning Star formation lacking confirmation. Amid a sustained presence of a short-term downtrend as indicated by the 20 SMAand ROCdownside risks remain. This leaves the spotlight on the mid-April ’10 low near 1,123.5.

Silver’s consolidation has negated a Morning Starformation on the daily, leaving the metal lacking bullish technical cues. With signs of a short-term downtrend intact (20 SMA, ROC) the focus remains on the 2010 low near 14.65.

Copper continues to gyrate erratically near the 3.00 handle with the latest upswing finding selling pressure at the 23.6% Fib. While this may limit the extent of further gains, caution is suggested when adopting fresh positioning given the commodity’s tendency towards volatility over recent months.

Palladium’s Bullish Engulfingpattern has been left lacking confirmation after a pullback from the 23.6% Fib. Negative cues remain for the commodity including signs of a downtrend from the 20 and 50 SMAs. This suggests a potential retreat towards the 2014 low near 735 may be on the cards.

Platinum is pressing against the critical 1,187 barrier after a key reversal pattern failed to find confirmation. With trend indicators pointing lower (20 SMA, descending trendline) a breakout could pave the way for a push towards the July ’09 low near 1,101.