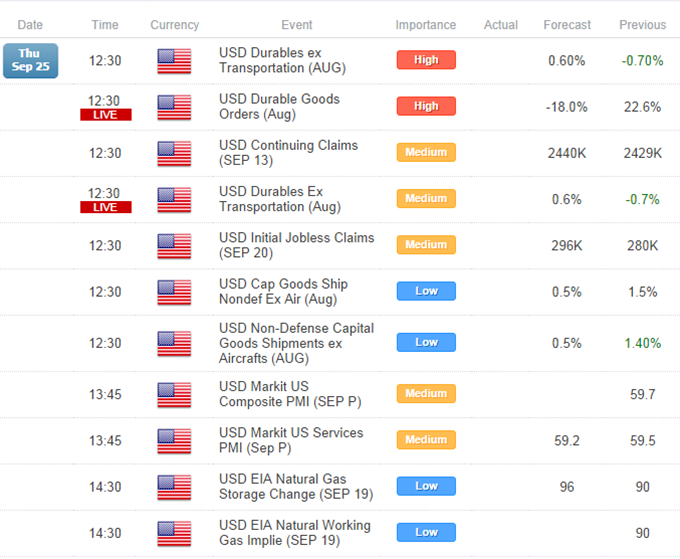 The precious metals are marginally weaker during Asian trading today. Palladium is leading the pack lower, while it sibling platinum is in close pursuit and has carved a fresh 2014 low (currently weaker by 0.69 percent).

The metals may take some guidance from their pricing currency the US Dollar over the session ahead. Firmer expectations for Fed policy normalization remain the dominant driver of the US Dollar’s strength. It would likely take a significant downside surprise to upcoming Durable Goods Orders data to damage hawkish Fed bets and turn the tide against the greenback. This in turn leaves the risks skewed to the downside for gold and silver.

Meanwhile, crude oil is treading water during Asian hours after a strong session on Wednesday. Newswires pointed to a surprise drawdown in US crude stocks as a catalyst for the gains. Yet the bulk of the move occurred long after the release of the US inventories report, suggesting profit-taking on short positions may offer a more likely explanation. Moreover, the report from the DOE revealed US crude production climbed to a new multi-decade high. This is likely to keep concerns over a supply glut alive over the near-term, which in turn may limit the scope of a recovery for WTI.

Also in the energy space; natural gas shot higher by close to 2 percent on Wednesday. This may have reflected expectations for a bullish reading from storage data due over the session ahead. However, another injection figure above the seasonal average is likely to keep anticipation for ample supplies alive. This in could make a recovery beyond the $4.00 handle difficult for the commodity.

Crude remains at a critical juncture as prices compress between the descending trendline and the 90.45 floor. The confirmation of a Bullish Engulfing candlestick formation on the daily hints at bounce. Yet against the backdrop of a sustained downtrend and with trendline resistance nearby a sustained recovery may prove difficult. This leaves the commodity awaiting a “breakout” to offer a clearer directional bias.

Gold has been left with a void of bullish reversal signals after a Morning Star formation failed to find confirmation. Within the confines of a downtrend this leaves the immediate risks skewed to the downside. A daily close below the 1,208 floor would open the next leg lower to the 2013 lows near 1,180.

Silver has slid back under buying support at the 17.75 barrier. Alongside signs of a downtrend (20 SMA and ROC) this makes fresh short positions an attractive proposition once again. The spotlight is now set on the July ’10 lows near 17.30. A climb over trendline resistance and the 18.19 mark would be required to warn of a base and a sustained recovery for the commodity.

Copper’s Inverted Hammer formation has received confirmation, which offers a bullish reversal signal for the base metal. Yet a sustained recovery may prove difficult within the context of a sustained downtrend and with the 3.08 ceiling nearby. A retest of the barrier would be seen as a fresh selling opportunity with a target offered by the 3.01 floor.

Copper: Recovery May Be Capped By Nearby 3.08 Barrier

The sustained presence of a downtrend for Palladium warns of further weakness for the precious metal. A failure to close above the 820 ceiling alongside a Doji formation indicates hesitation from the bulls to return to the commodity. This in turn offers a fresh selling opportunity with a target offered by the June lows near 792.

Platinum has achieved the 1,314 target offered in recent reports. This may see the precious metal succumb to some profit-taking and prompt a period of short-term consolidation. Yet against a broader bearish backdrop an eventual break below the level of buying support would be seen as a fresh opportunity for short positions. The next downside targets are offered by the July and June 2013 lows at 1,308 and 1,285 respectively.