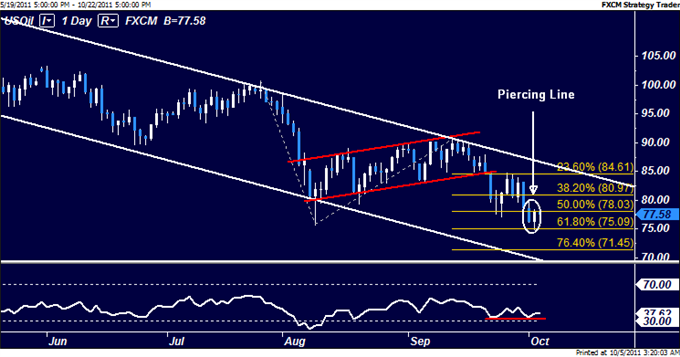 S&P 500 stock index futures are pointing sharply higher ahead of the North American trading open, hinting crude oil prices are set to rise along with the spectrum of risky assets as sentiment improves (if only briefly) across financial markets. Optimism appears to be driven by comments from EU Commissioner Olli Rehn as quoted in the FT, where he seems to hint that policymakers are plotting a coordinated recapitalization of the region’s banks.

On the economic data front, the ADP Employment gauge in focus ahead of Friday’s official jobs reading. The report is expected to show hiring slowed for the third consecutive month in September, with a print in line with expectations threatening to unleash risk aversion anew. The ISM Non-Manufacturing reading is also on tap and is likewise expected to show deterioration. Weekly DOE inventory figures round out noteworthy event risk.

On the technical front, prices put in a bullish Piercing Line candlestick pattern above support at 75.09, the 61.8% Fibonacci extension level. Positive RSI divergence reinforces the case for an upside scenario. Initial resistance stands at 78.03, the 50% Fib, with a breakout higher targeting the 38.2% level at 80.97.

Gold came back under pressure after Federal Reserve Chairman Ben Bernanke said there were no immediate plans for an expansion of the central bank’s balance sheet through further asset purchases and stressed the so-called “Operation Twist” program announced last month does not constitute QE. A rebound in share prices also helped, sapping safe-haven demand for the yellow metal.

Looking ahead, strong gains on S&P 500 stock index futures ahead of the opening bell on Wall Street point to continued weakness. Prices are testing the lower boundary of their recent range at 1589.14, the 14.6% Fibonacci retracement level. A break below this level exposes the September 26 low at 1532.45. Near-term significant resistance stands at 1680.78, the 38.2% Fib.

Speculators in futures markets cut net long gold positions to the lowest level since January 2009 last week, down by a whopping 48.3 percent since the most recent peak two months ago. Meanwhile, gold ETF holdings slid to the lowest since late July. Such a sharp unwinding certainly makes a correction a reasonable proposition in the near term. With that said, the longer-term trend continues to appear bearish. 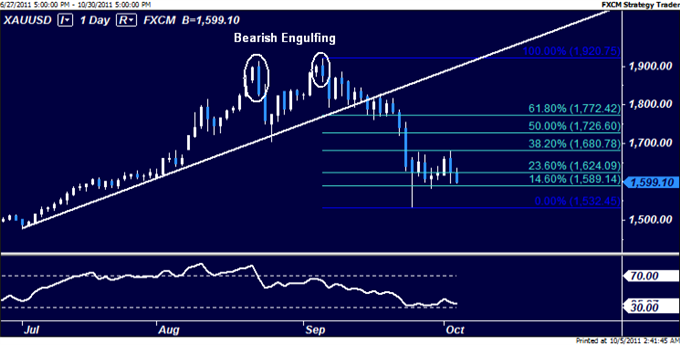 As with gold, silver finds itself under pressure after Ben Bernanke dismissed further QE while shares recovered. On the technical side of things, prices are testing below support at 29.42, the 23.6% Fibonacci extension. A break lower on a closing basis exposes the 38.2% level at 26.90. For the time being however, the 14.6% level at 30.98 remains as near-term resistance. 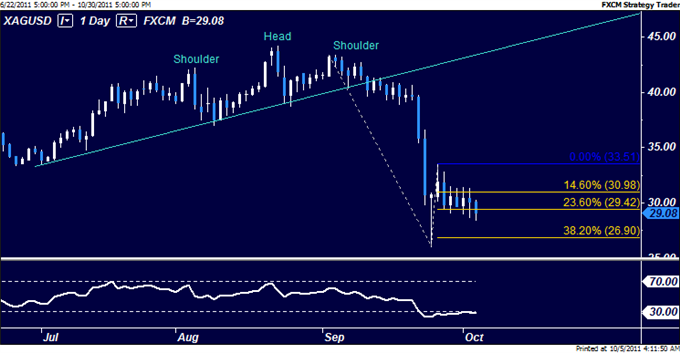