The Euro outperformed against its major counterparts on Thursday, owing to a less-dovish-than-expected ECB monetary policy announcement. Anticipation of a rate cut by the end of this year dropped from about a 47% probability yesterday to 37% as German front-end government bond yields rallied. As a side-effect, the US Dollar took a hit and depreciated against its peers given that Fed rate cut bets are on the rise.

President Mario Draghi envisioned holding rates through at least the first half of 2020, compared to the end of 2019 prior. But, near-term growth and inflation expectations were revised higher. This year, they are looking at regional economic expansion of 1.2% from 1.1% with CPI at 1.3% from 1.2%. While the central bank remains confident in their baseline assessment of the economy, risks are still tilted to the downside.

EUR/USD closed above near-term horizontal resistance at 1.1262 after days of struggle, rising as anticipated. But, my medium-term outlook is still biased to the downside. From here, the currency pair is eyeing a descending range of resistance going back to the beginning of this year. Just above it is also a critical psychological barrier between 1.1302 and 1.1324. If these are cleared, it exposes reversing the dominant downtrend. 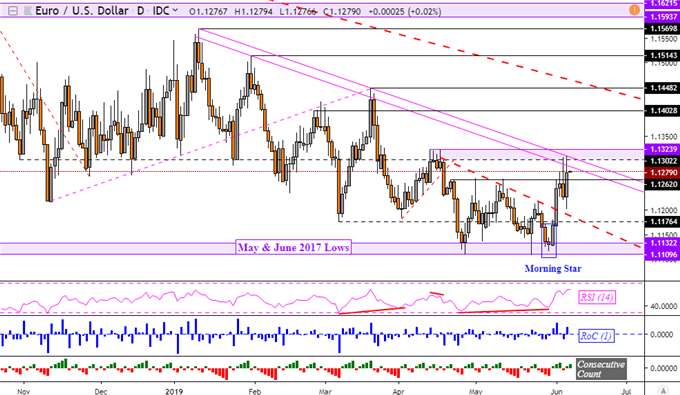 The ECB was felt not just regionally, but externally as well. S&P 500 futures fell alongside the DAX and Euro Stoxx 50. However, sentiment recovered, especially after reports crossed the wires that the US was weighing delaying Mexican tariffs after attempts to reach a deal fell apart yesterday. But, that optimism appears short-lived after US Vice President Mike Pence hinted that the levies will take effect on Monday.

As such, we aren’t in the clear yet for a confidence-inspiring recovery in risk trends. US President Donald Trump still has to make his decision on additional Chinese tariffs that will encompass virtually all imports. He has said that the choice will come as we get to the G20 Summit occurring in Osaka, Japan, at the end of this month. I believe that in the medium-term, the US Dollar is poised to benefit if aggressive risk aversion ensues.

In the meantime, S&P 500 futures are now pointing lower after the US-Mexico trade talk developments. Even though we saw a rally on Wall Street, Asia Pacific equities may struggle to find much upside follow-through as they did yesterday. In Australia, shares of BHP Group, a major mining company, look like they are hinting of a top to potentially come in the ASX 200 as trade war fears risk heating up. The anti-risk Japanese Yen may rise.