Global equity markets, after weeks of lackluster performance, finally received a breather as European, US and emerging markets indexes rallied. The pickup in market optimism clearly boded ill for the typical anti-risk major currencies, the Japanese Yen and Swiss Franc. Conversely, the pro-risk Australian and New Zealand Dollars aimed cautiously to the upside.

The best day for the S&P 500 since early January, as it rallied 2.14%, could be attributed to commentary from Fed Chair Jerome Powell. After weeks of fears surrounding an uptick in US-China trade wars, with recent worries focusing on US-Mexico tensions, the central bank chief said that they are “closely monitoring” the impact of trade developments and “will act appropriate” to sustain expansion.

After the markets doubled down on rate cut bets yesterday, those bets increased further. Expectations of a cut in July are now hovering at 61.2%, up from just a 23.2% probability one week ago. Yet, Mr Powell did not explicitly mention the word “rate cut”. He did highlight that the economy is growing, unemployment is low and that inflation is stable.

A couple of hours later, Fed Vice Chair Richard Clarida reiterated much of the same commentary. He mentioned that in the event of higher tariffs, that “would have to be taken into account”. Like Jerome Powell, he did not talk about market pricing of cuts nor mention them. Mr Clarida also took the time to express optimistic views on the US economy seen below.

Taking a closer look at USD/JPY, the currency pair is sitting above 107.52 after narrowly clearing the rising support line form June 2016. As noted in the Q2 Japanese Yen technical forecast, further confirmation to the downside from here opens the door to extending declines in a bearish continuation pattern. If that is the case, in the medium-term, we could be looking at getting to 104.78. However, positive RSI divergence hints that downside momentum is ebbing and this may precede a turn higher to resistance at 109.02. 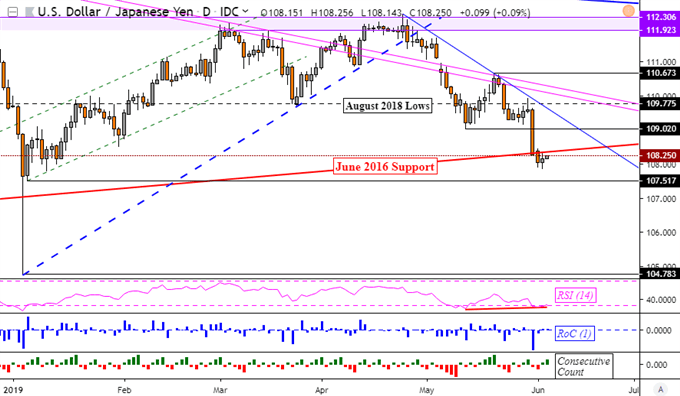 What is interesting is how the US Dollar performed today. The Greenback very clearly slowed recent declines as local front-end government bond yields initially rallied after commentary from Fed Chair Jerome Powell. This is a sign of rising confidence in the markets as demand for treasuries faded. I believe that in the medium-term, the highly-liquid US Dollar may rise as rate cuts signal economic slowdown concerns.

S&P 500 futures are pointing clearly higher, opening the door for gains to be had in equities during Asia Pacific trading hours. This may bode ill for the Japanese Yen. As for the Australian Dollar, it looks to first quarter GDP data which risks disappointing , fueling additional RBA rate cut bets. However, market positioning hints a bullish-contrarian trading bias.

Join me as I cover the impact of market positioning on currencies such as the Australian Dollar and Japanese Yen on Wednesday’s at 00:00 GMT!