In the fourth quarter of 2018, the S&P 500 plummeted over 20% as it entered correction territory. Equities around the world followed, Japan’s and Germany’s benchmark Nikkei 225 and DAX 30 dropped respectively. Demand for safe havens offered a generous boost to the world’s most-liquid currency, the US Dollar. Local government bond prices rallied as traders flocked into what is essentially the world’s “risk-free” asset.

There was much to worry about for financial markets, such as an escalation in US-China trade wars, slowing global growth and the uncertainty over the future of Brexit. Meanwhile, the Federal Reserve unexpectedly raised rates four times by year-end. The central bank was partially driven to do so by the White House delivering on corporate tax cuts.

What eventually lead to a recovery in the S&P 500 was arguably the Fed’s dovish monetary policy shift, pictured below. It was evident by the beginning of 2019 that there was fading confidence from policymakers over the trajectory of interest rates. One thing lead to another and the central bank went from envisioning two hikes this year, to none at all.

For most of this year, a relatively timid Fed and cooling fears of a US-China trade war helped the S&P 500 trim its losses from 2018. But this has since changed, and we may be facing a similar scenario to what markets witnessed last year. US-China trade war fears have been revived as of late, but the Fed is stressing the importance of a data-dependent approach. 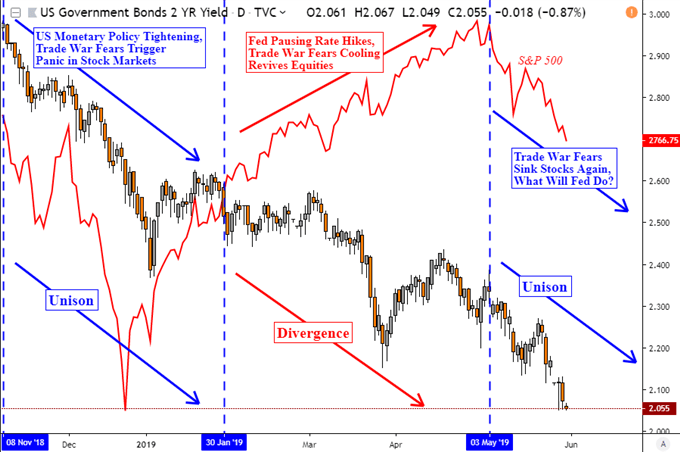 Rising Fears of a US Recession, Will the Fed Step in?

The S&P 500 finds itself falling alongside US front-end government bond yields again. This is a classic example of risk aversion as traders buy into Treasuries, pushing prices higher at the expense of yields. Last time, it took the Fed pausing rate hikes to bring an end to the panic, and markets are now expecting them to take it one step further.

Fed funds futures are pricing in slightly better-than-even odds that the central bank will cut in September, with potentially more to come in 2020. This may be for good reason. On the next chart below is the difference between 10-year and 3-month bond yields. This key section of the US yield curve has inverted, meaning that short-term yields are above longer-term alternatives.

While this is typically seen as a warning sign of a recession, whereby rate cuts in the future help support economic activity, it usually takes persistence in this signal to be confident in follow-through. Back in the summer of 2006, the same segment of the yield curve inverted and stayed so for about a year. US housing prices meanwhile decreased as the bubble burst, leading to the 2008 financial crisis. 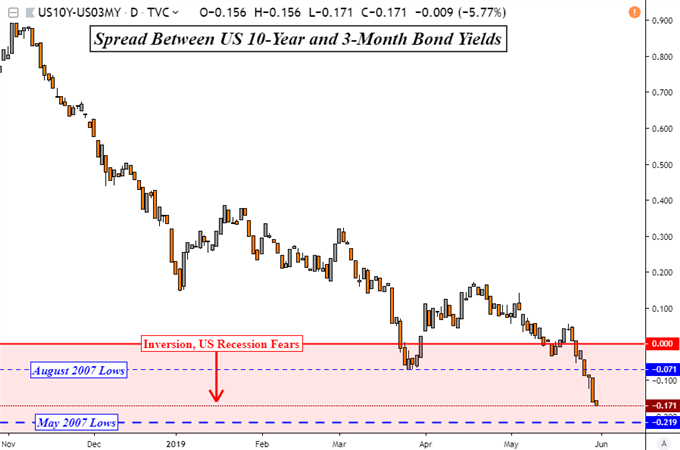 Recent activity in US government bond auctions seems to show fading confidence in upbeat economic activity ahead. On May 28, we saw an uptick in demand for bonds closer towards the front end of the curve. This included 3-month, 6-month and 2-year Treasuries. However, demand for longer-dated paper - such as 5-year and 7-year notes - weakened

In short, this means that markets could be expecting that rates start rising again in about 5-7 years. But the question comes back to how the Fed will respond with risks such as trade wars, with a new one potentially re-opening up on the North American front, and placing the fledgling USMCA deal in doubt. Worrying proliferation of CLOs compounds the risk of panic across financial markets. Looking at May’s FOMC meeting minutes, we saw the central bank downplay external developments while stressing the importance of incoming economics news-flow.

If the US economy chugs along solidly, we may not get a rate cut and this will likely add fuel to the selloff seen in equities, as this will probably disappoint the markets. The US Citi Economic Surprise Index is still negative however, hinting that analysts are overestimating the health and vigor of the economy. If this holds true, softer-than-expected data may compel the Fed to lower rates as it pauses the unwinding of its balance sheet.

Impact on US Dollar

However, it is unclear if this will necessarily bode ill for the US Dollar judging by how well it performed this year despite a relatively dovish Fed. If the central bank resorts to cutting rates due to a downturn in the economy, that may fuel risk aversion, which bodes well for havens such as the Greenback. As mentioned earlier, a lack of follow-through on delivering cuts can also induce market pessimism. With that in mind, any near-term USD weakness may be limited.

How to Trade the USD Index

From a technical standpoint, the DXY may find itself eventually taking out near-term resistance, which is a range between 98.15 and 98.37. If these are cleared, that would open the door to testing highs last seen in May 2017 between 99.63 and 99.89. In the event of declines in the US Dollar however, keep an eye on the rising trend line from September 2018. It may hold and keep the dominant uptrend intact. 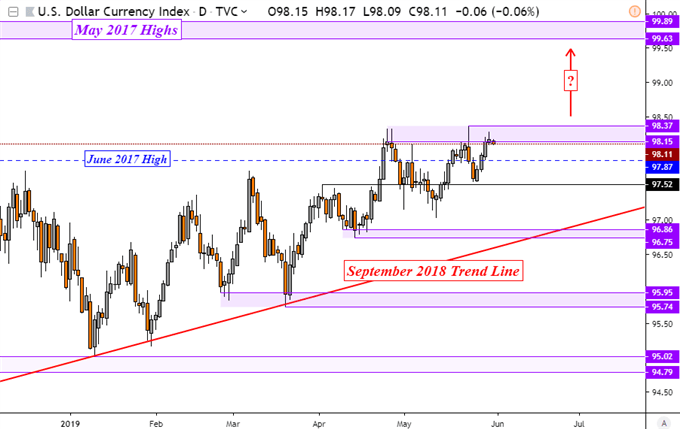