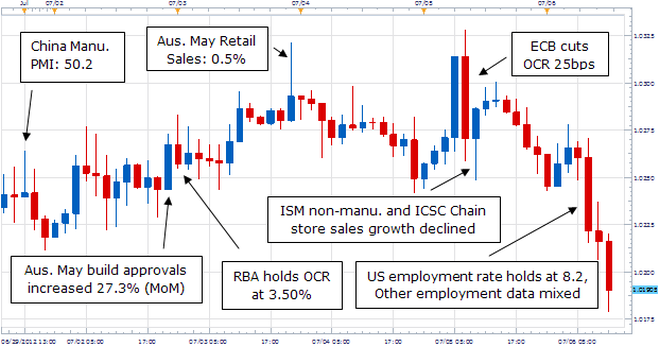 AUD/USDGraphic Rewind: Aussie Gives Back Some of EU Gains

This week the AUDUSD rode on the market-wide optimism that was sparked by the EU Summit and maintained by the hope of a coordinated stimulus effort from the European Central Bank. The ECB shattered that hope at Thursday’s press conference that ended the rally in the AUDUSD.

The AUDUSD began the week on a short spike after the China Manufacturing PMI beat expectations by reporting a reading above 50, signally an expansion in the manufacturing sector. A survey conducted by Bloomberg called for a contraction in the Chinese manufacturing sector which would have implied less demand for Australian raw material. The pair poppedon Tuesday when the May building approvals expanded by 27.3 percent from April, bringing the total growth in building approvals during the past 12 month to 9.3 percent. The expansion in May building approvals highlights the fact that investors were optimistic about the future of the Australian economy even before the 25 bp rate cut that came in June. The Pair continued to rise over the fallowing two hours, but ended lower after the Reserve Bank of Australia decided to hold the overnight cash rate (OCR) at 3.5 percent. The pair only moved a few pips after the announcement, because market participants where already pricing in that RBA would hold the overnight cash rate.

On Thursday the AUDUSD declined nearly 100 pips after the European Central Bank cut the OCR to an all time low of 0.75 percent, but offered no stimulus efforts. After the press conference trades flocked back to the safe haven currency, the USD, which lead to declines in the AUDUSD. The downward trend continued on Friday after the US released the June employment data, the AUSUSD fall roughly 100 points to settle at 1.0190 (at time of writing). The FXCM US Dollar Index (Ticker: USDollar) rallied after it was noted that Unemployment did not rise. The Jump in the US Dollar may have been the result of risk adverse investors seeking a sideline position regardless of jobs data.

At the end of this trading week the AUDUSD has given back about 30 percent of the gains that were made during the two days of the EU Summit, and The Aussie Dollar may give up more of the EU Summit gains if there is another pull back in risk appetite.