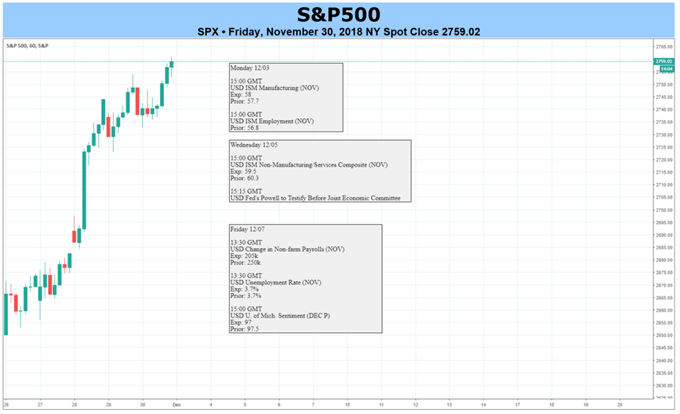 A Dovish Fed Bolstered US Equities

US equities were driven higher last week on the back of seemingly dovish comments from Federal Reserve Chairman Jerome Powell. The Dow and S&P 500 closed the week and month higher, while the NASDAQ posted a third consecutive month of decline despite a strong week itself. Despite three months of turbulence, all three indices are again in the black for 2018 as we enter December with many hoping for a Santa Claus rally. The case for a Christmas miracle was bolstered after the G20 summit concluded in a productive manner and any escalations in the US-China trade war were paused. 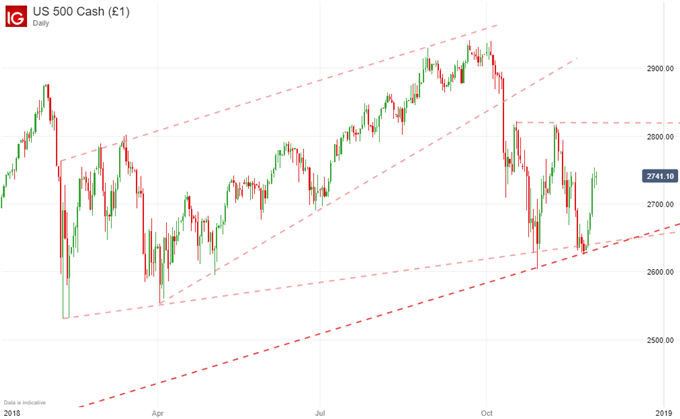 G20 Aftermath to Drive Global Equities in the Week Ahead

Leaders from 38 nations across the globe travelled to Buenos Aires, Argentina on Friday to discuss the future of work, infrastructure for development and a sustainable food future. While noble and deserving causes, the scheduled discussion was overshadowed by trade talks between leaders from the world’s largest economies. The most anticipated event was a sit-down dinner between President Donald Trump and Chinese President Xi Jinping. The two heads of state have clashed over trade as their nations remain locked in an ever-growing trade war.

Read up on the history of trade wars to gain context for the US-China trade war with A Brief History of Trade Wars.

That said, market expectations as the meeting approached were mixed. Many believed President Trump would be unwilling to make a deal with China and subsequently increase already enacted tariffs. Instead, it was reported the two leaders had constructive conversation and agreed to pause any further tariffs until January 1st. The truce will sooth some fears for global equity markets and US indices in particular. Thus, barring any new trade war fronts, expect a renewed sense of stability in the week ahead as markets take advantage of the relative certainty and attempt to work out the next steps for the US-China trade war.

The trade war truce will also serve to aid the Nikkei in the week ahead. As a major economy, many Japanese corporations noted the impact of the trade war between two of its largest trading partners. While the Trump-Xi dinner may boost morale for some, the risk of US auto tariffs on Japan remains. President Trump and Prime Minister Shinzo Abe discussed trade and the G20 but also fell short of any concrete developments. In the past, the Trump administration has weighed auto tariffs on Japan but has not yet pursued the option. 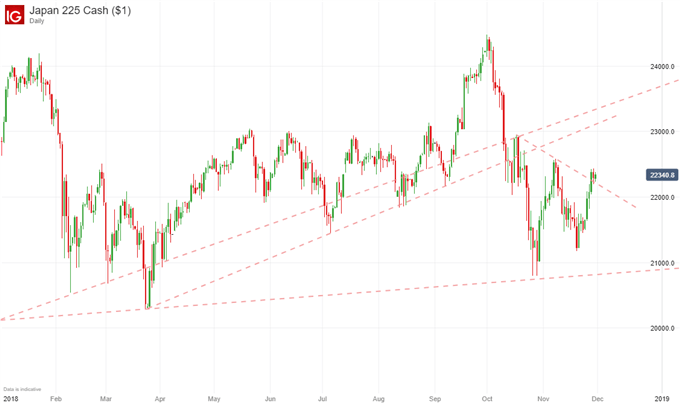 Similarly, the DAX will be focused on autos in the week ahead. On Wednesday, German automakers BMW, Mercedes and Volkswagen will travel to the White House. The meeting will likely cover the possibility of auto tariffs on the EU, another possible direction of the Trump administration’s effort to rebalance its global trade deficit.

A concrete agreement to hold off on tariffs would spur the DAX higher. Conversely, a pledge from the automakers to increase manufacturing in the US could siphon some gains to the S&P 500. Either way, the event will be critically important for the global auto industry and trade relations between the US and EU. 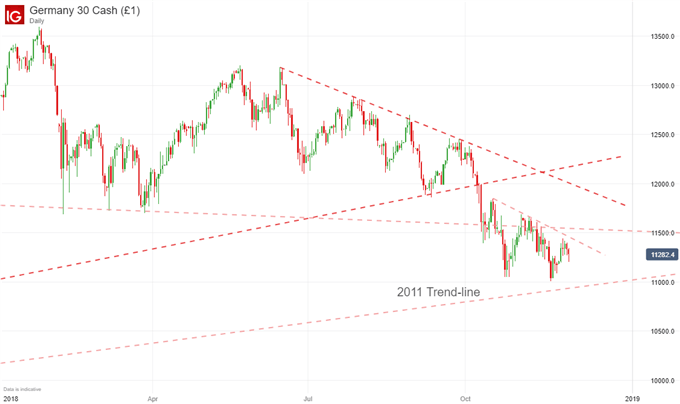 Learn how to trade the DAX.

Finally, the FTSE will again look to Brexit. As Theresa May seeks to win over support for her deal this week, last week saw the BOE warn of the severely damaging economic impact should the UK drop out without a deal. Thus, if confidence in the PM is questioned, expect trouble for the FTSE. A decline in GBP/USD could offset greater FTSE losses but the exact impact will only be seen once the specifics of a Brexit breakdown or deal are made known. 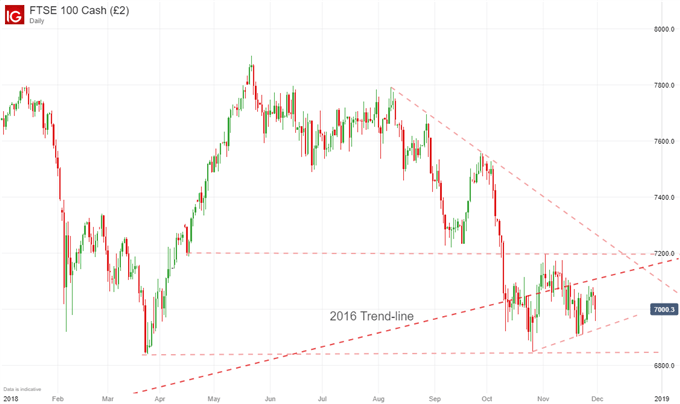 Sparse Data in the Week Ahead

The week ahead will be rather quiet from a data perspective, especially in comparison to the whirlwind of central bank press releases last week. US manufacturing will be a figure to watch on Monday as well as Fed Chairman Powell’s address to the Joint Economic Committee on Wednesday.

US Dollar Forecast – US Dollar May Rise on Economic Data Flow, Powell Testimony