US Dollar May Rise on Economic Data Flow, Powell Testimony 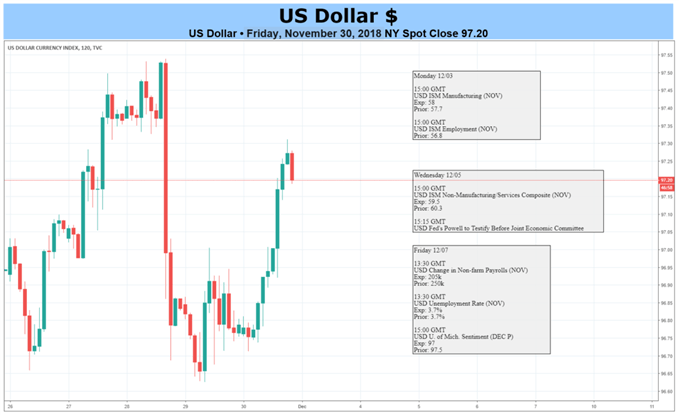 The past week proved to be somewhat traumatic or the US Dollar. Investors scrambled to unwind long-USD exposure after Federal Reserve Chair Jerome Powell said the current setting for benchmark interest rates is “just below” estimates for the neutral range. That is a band from 2.5 to 3.5 percent on the Federal Funds rate, wherein policymakers expect to find the level that neither stimulates nor constricts economic growth.

Investors read this to mean that the Fed might be all but done with its rate hike cycle. The Greenback sank alongside benchmark Treasury bond yields while the priced-in 2019 tightening bets deflated. Only a single 25 basis point increase is now expected. Equites celebrated, with the bellwether S&P 500 index scoring the largest one-day increase in three weeks.

This seems like an overreaction. Most members of the rate-setting FOMC committee put the neutral rate in the middle of the range at 3 percent. Getting there from the current 2 to 2.25 percent target amounts to 75-100 basis points in tightening, which happens to be exactly in line with the official forecasts that the central bank published in September. Within that context, Mr Powell’s remarks hardly sound dovish.

Still, a change in the Fed’s messaging strategy does seem to be afoot. Minutes from November’s policy meeting singled as much, suggesting officials are trying to pivot away from telegraphing their intentions as far into the future and adopt a more near-term data dependent stance. That need not imply a retreat from stimulus withdrawal if incoming news-flow performs as well as it has recently.

In fact, the opposite may well be the case. The Fed seems to have given up the “dovish surprise” as a policy tool and looks to be trying to inject greater uncertainty in the markets’ expectations. That may be a nudge against complacency, intended to wean investors off determinism and thus smooth the way for the rate hike cycle to continue even as the external landscape turns increasingly ominous.

US DOLLAR MAY RISE ON DATA FLOW, POWELL TESTIMONY

The week ahead offers ample opportunities to demonstrate as much. A slew of economic data releases is headlined by November’s jobs report. It is expected to show that payrolls added an on-trend 200k, the jobless rate remained at a 49-year low of 3.7 percent, and wage growth held at the brisk pace of 3.1 percent on-year. PMI and ISM activity metrics are seen pointing to healthy performance despite slight moderation.

Against this backdrop, Chair Powell is due to testify on the economic outlook before in the US Senate. This will present the perfect opportunity to fine-tune last week’s message with the benefit of knowing how it impacted markets. Unless a dovish signal was indeed intended, this will amount to push-back against last week’s trading patterns that helps rebuild rate hike bets and lifts the US unit.