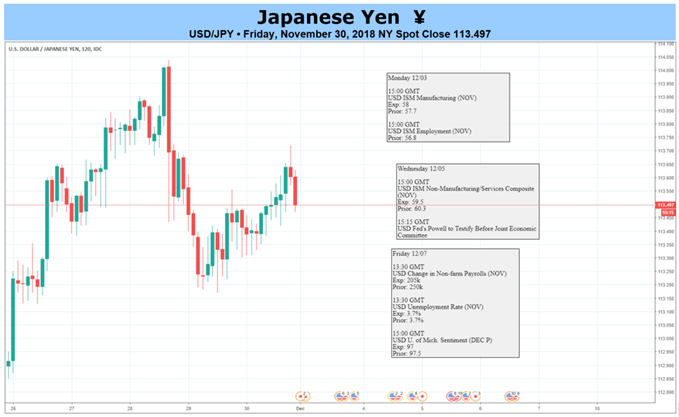 USD/JPY marks another failed attempt to test the 2018-high (114.55)as Fed Chairman Jerome Powell tames speculation for an extended hiking-cycle,and the dollar-yen exchange rate may continue to consolidate ahead of the next interest rate decision on December 19 as it preserves the range for November.

The reaction to Chairman Powell undermines the recent resilience in USD/JPY and leaves the greenback vulnerable to near-term headwinds as the central bank head is scheduled to testify in front of the Joint Economic Committee of Congress next week.

Chairman Powell may strike a similar tone before U.S. lawmakers as ‘the economic effects of our gradual rate increases are uncertain,’ and another batch of less-hawkish remarks may sap the appeal of the U.S. dollar as there appears to be limited views on implementing above-neutral interest rates. In turn, the U.S. Non-Farm Payrolls (NFP) may do little to influence the near-term outlook for USD/JPY even though the updates are anticipated to show the economy adding another 200K jobs in November, and the FOMC could be nearing the end of the hiking-cycle as interest rates ‘remain just below the broad range of estimates of the level that would be neutral for the economy.’ 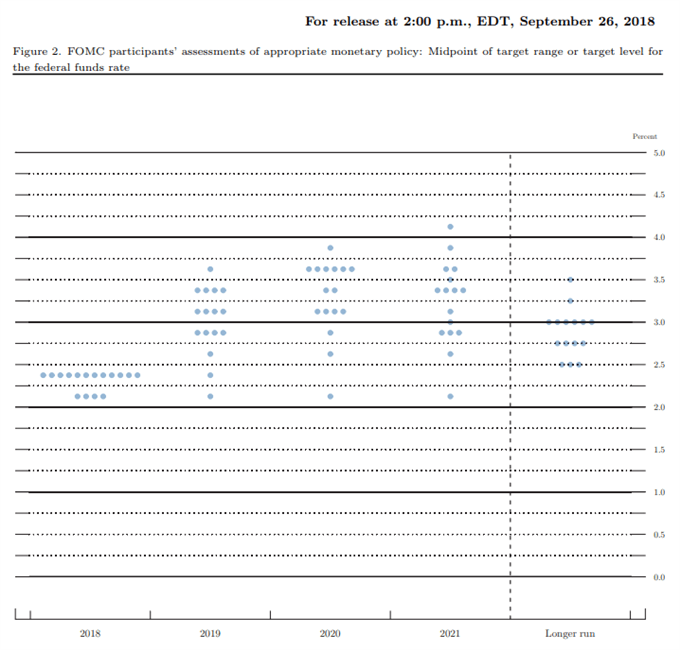 Keep in mind, the FOMC Minutes suggests the central bank will deliver another rate-hike at its last meeting for 2018 as ‘almost all participants expressed the view that another increase in the target range for the federal funds rate was likely to be warranted fairly soon,’ and Fed officials may stay on track to implement higher borrowing-costs in 2019 as the shift in U.S. trade policy raises the outlook for inflation.

Chairman Powell & Co. may continue to project a neutral fed funds rate of 2.75% to 3.00% as ‘contacts in many Districts indicated that input costs had risen and that increased tariffs were raising costs,’ and expectations for higher U.S. interest rates instills a long-term bullish outlook for USD/JPY especially as the Bank of Japan (BoC) appears to be on course to carry the Quantitative/Qualitative Easing (QQE) Program with Yield-Curve Control into the year ahead.

Until then, USD/JPY stands at risk of facing range-bound conditions as the exchange rate flops ahead of the 2018-high (114.55), with recent price action raising the risk for a larger pullback as it snaps the string of higher highs & lows from the previous week. Sign up and join DailyFX Currency Analyst David Song LIVE for an opportunity to discuss potential trade setups! 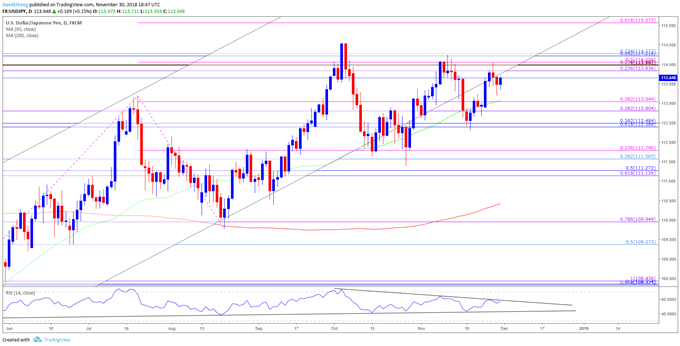 The advance from the November-low (112.30) may continue to unravel as USD/JPY preserves the monthly range, with the Relative Strength Index (RSI) highlighting a similar dynamic as the oscillator remains stuck in a near-term holding pattern.