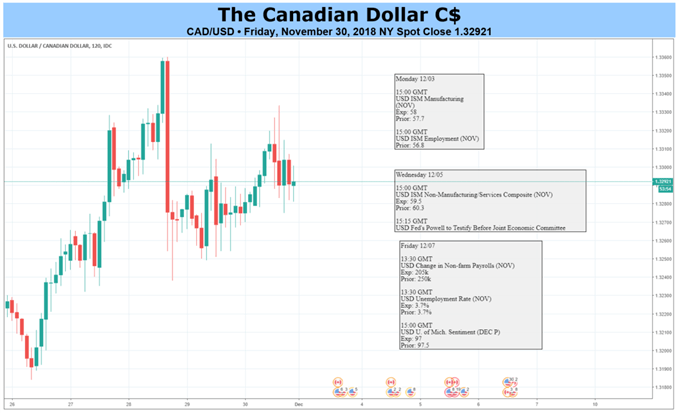 Have a question about what’s in store for Canadian Dollar next week? Join a DailyFX Trading Q&A Webinar to ask it live!

The Canadian Dollar continued being pressure against the US Dollar as we headed towards the end of the week. This has generally been the trend since October amidst the backdrop of fading near-term Bank of Canada rate hike expectations and a slump in crude oil prices. The former represents the main appeal of a currency while the latter is a key source of revenue for Canada.

Likely, the main event for the Loonie ahead may be the last BoC rate decision of 2018. This event is arguably one of the key reasons why CAD has been under pressure since the central bank last raised rates in October. About a month ago, the markets were roughly pricing in a 30 percent chance of another hike in December. Those are now at zero, aiding to send USD/CAD about 2% higher since then.

Since markets are forward looking, attention will turn to the BoC’s guidance to gauge when the next hike could be expected. This is because policymakers are looking to raise rates to a neutral level, similar to the Fed. Overnight index swaps are pricing in a 66% chance of a rate increase afterwards in January 2019. This is followed by a 32.1% chance of a subsequent one in April. We may get further clarification from a speech by BoC’s Governor Stephen Poloz the following day.

Signs that the central bank may pull the trigger on another hike soon would benefit the Canadian Dollar, but gains against the US Dollar could be difficult. Arguably, the Fed is more hawkish than its Canadian counterpart. But, this could leave the Australian and New Zealand Dollars considerably more vulnerable to a hawkish BoC. Their respective central banks may not even raise rates once in 2019.

After the BoC and a speech from its Governor, the Canadian Dollar awaits November’s local jobs report. Canadian economic news flow has generally been tending to underperform against economists’ expectations. Given a data dependent central bank, an unexpected negative surprise in the employment report risks sending CAD lower. As such, do also keep a close eye on the accompanying hourly wage numbers.

Finally, the 175th OPEC meeting is on the table. Speculation has been building of potential supply cuts on the horizon amidst the plunge in crude oil. But, this could be made difficult to achieve if Russia, a major non-OPEC producer, is not on the same page. With that in mind, the Canadian Dollar fundamental outlook will have to be neutral.