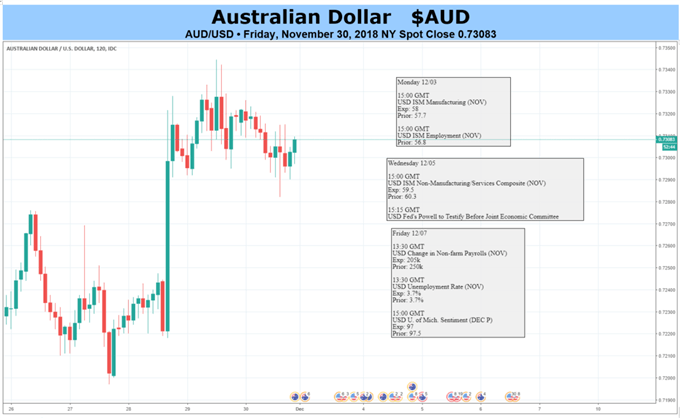 The Australian Dollar is back to highs against its US big brother that the market had not previously seen since August. This is thanks to a combination of fundamental factors and hopes, some of which should face tests quite soon.

Prominent among them is the hope that the meeting between US President Donald Trump and his Chinese counterpart Xi Jinping in Argentina, at the Group of 20 summit which started on Friday, will bring at least a thaw in the deep-frozen trade relationship between the US and China. Given Australia’s close links with both global titans, Australian Dollar trade has much more than a passing interest in this outcome.

However, given the complexities of the trade impasse, it seems unlikely that concrete progress can be made just yet so, to that extent, the AUD/USD market could be set up for disappointment. That’s even if the overall tone of discussion does indeed prove more constructive than it has been,

Then there is the ‘USD’ side of AUD/USD. That has been subject to a modest rethink about the number of US interest rate rises likely next year. This in turn came about after a speech from Federal Reserve Chair Jerome Powell taken as more ‘dovish’ (ie inclined towards fewer rate rises) by the market.

But even if the market is right about this, AUD/USD may be a little ahead of itself here too. After all, the Australian Official Cash Rate remains stuck at the post-crisis record low of 1.50% in place since August 2016. And for all the Reserve Bank of Australia’s oft-repeated caution that such low rates cannot endure forever, futures markets fail to price in even a quarter-percentage-point rise between now and April 2020.

The RBA will meet to set monetary policy on Tuesday. Clearly it is not expected to alter interest rates at all, but the markets will await any statement with interest. The RBA has been implicitly rather pleased by the Australian Dollar’s decline this year as it has helped it to deal with persistently weak inflation. Even so consumer price rises remain below-target and the RBA could well wonder aloud whether recent Australian Dollar strength is fully justified. It probably won’t be too emphatic. This is one central bank that doesn’t like to fight markets. However, it may still contrive to weigh a little on AUD/USD.

Still, this is perhaps an unusually tricky week to forecast. Bright news on trade from the G20 could see risk appetite set-fair, disappointment will probably set it back some way.