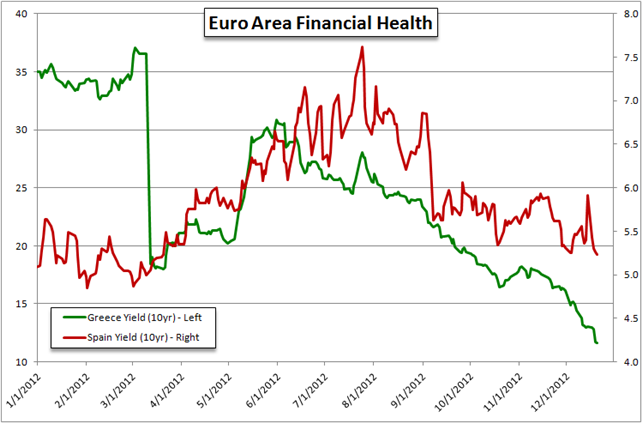 The Euro has put in for a remarkable trend shift through the second half of 2012, but its bullish ambitions should not be considered a clear trend. The progress the currency has made through this period was derived from genuine fundamental improvement (Greece receiving its aid payment, Spanish and Italian yields dropping, the introduction of a potentially unlimited ECB support program), but it is only a ‘relief rally’ until legitimate growth and investor confidence take root. That path will be fraught with trouble and uncertainty as we face possible risks in Spain seeking a bailout, an Italian election and market-wide risk trends coming back under pressure. To extend EURUSD’s rally towards 1.4000, everything has to align.

When we review the essential fundamental trends for the euro over the past three-to-six months, we find that the currency’s greatest systemic threats found significant relief. And, in that reprieve, the euro has found a rebound. The greatest source of concern for the regional financial system – and thereby the currency – the past two years has been the risk that Greece could catalyze a systemic failure within the Eurozone. Whether the country left the group or dragged more of its peers into crisis through shared exposure, the troubled nation was seen as the possible undoing of the Euro.

Given the focus and weight this single country has drawn amongst investors, it is only natural that its resolution reduces so-called ‘tail risk’ and thereby culls short euro exposure while feeding a rebound from depressed levels. This reduction in imminent doom can be seen directly in the steady drop in Greek lending rates (in the chart above). Though still exceptionally high, the rate of return the market demands from the country to borrow money (critical for a government to operate) has dropped through the end of year to its lowest level since February of 2011. Furthermore, with an impending implosion of a Eurozone member forestalled, other troubled regional economies are given more breathing room - as Spain’s benchmark 10-year government bond yield shows above.

A relief rally can curb speculative positioning for a full-blown, systemic catastrophe and attractive opportunistic investors looking to pick up an oversold currency. Yet, a trend based on reduced risk of financial collapse is not of the same quality as one established through expectations of strength and competitive returns. In other words, buying time for Greece affords the euro only so much buoyancy.

Greece Isn’t the Only Threat

Given its severe economic and social problems alongside the risk of a global slowdown, Greece will likely return as a serious threat to the Eurozone in the future. But, that will not likely happen in the first quarter. 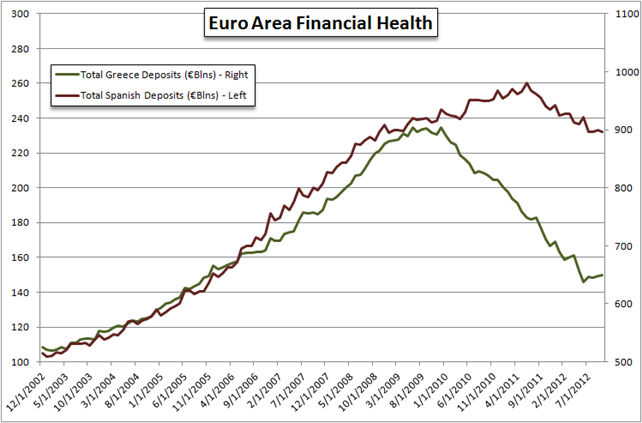 There are plenty of other flash points to set the Euro’s fundamental and financial health alight. In the chart above, we are confronted with a more elemental measure of individual countries’ health – the direction and rate of capital from the banking system. At the root of Greece’s troubles was the withdrawal of nearly 40 percent of the county’s capital form the financial system – rendering growth and banking system repair virtually impossible.

The risk heading into the first quarter of 2013 is that Spain falls into the same vortex that Greece has suffered over the past two years. The seeds have already been sown. A recession and unemployment rate above 25 percent make a natural recovery from a housing sector-driven debt load virtually impossible. Delays in the EU Banking Union (a requirement to further supporting of national banking systems), growing need for funds from regional governments locked out of the debt market, Catalonia’s adoption of a tax on bank deposits and a myriad of other issues will likely force Prime Minister Mariano Rajoy to seek a bailout in the first quarter. An official rescue from the EU (Troika) would open the door for the European Central Bank (ECB) to unlock the OMT (Outright Monetary Transactions) program to buy Spanish government bonds until the yield eases to stable levels so they can work on austerity and growth. In the lead up to that eventual recovery, the euro will likely feel the stress.

Italy is another at-risk country through the opening months of 2013. Though not considered one of the immediate financial threat to the region, the country’s recession and tremendous total debt load pose a ‘Too Big to Save’ risk for the Eurozone should it fall on harder times. With Prime Minister Mario Monti having tendered his resignation, the country’s upcoming election (expected sometime in February) will shape the country’s balance between austerity and growth. And, given the threat by former Prime Minister (and possible candidate for the upcoming vote) Silvio Berlusconi that if Germany wouldn’t allow rates the ECB to lower rates, Italy would be forced to exit the euro (as unlikely as that is), we can see the outline of tension for a critical core member.

Another risk to arise from the Euro-area financial crunch this past quarter - that doesn’t seem to have been fully appreciated – comes through comments made by Portugal Prime Minister Pedro Passos Coelho. Following the incredible efforts made to cut the debt load, lower yields and extend repayment time frames for Greece, Portugal’s leader said he would fight for equal treatment for its own bailout terms. Creditors made it explicitly clear that Greece was unique; but for Portugal (and Ireland) attempting to return to the debt market later in 2013, they may be forced to see similar modifications or fall deeper into recession. Of course, such demands could undermine support for the entire rescue effort.

There are plenty of risks for the euro that come through internal fundamental troubles. Yet, perhaps the greatest risk (or hope) for the currency moving forward is the general state of risk appetite. As the saying goes: ‘a falling tide sinks all boats’. There is an inherent uncertainty behind the euro’s stability moving forward as recession, debt reduction, political changes and social turmoil maintain a consistent state of risk.

However, if global investors are generally tolerant of uncertainties moving forward and are more concerned with higher yield or depressed-value assets; the currency will exhibit greater strength. Alternatively, if sentiment falters; the troubles in the Eurozone will seem far more sinister and immediate.

Therefore, moving forward, euro traders must keep a close eye on the ebb and flow of general risk appetite trends. In the chart below, I have set the EURUSD against the Risk-Reward Index (a measure that divides the aggregate of the majors’ benchmark government bond yields or ‘Reward’ by the FX Volatility Index or ‘Risk’). We can also use the S&P 500 as another benchmark for investor confidence. 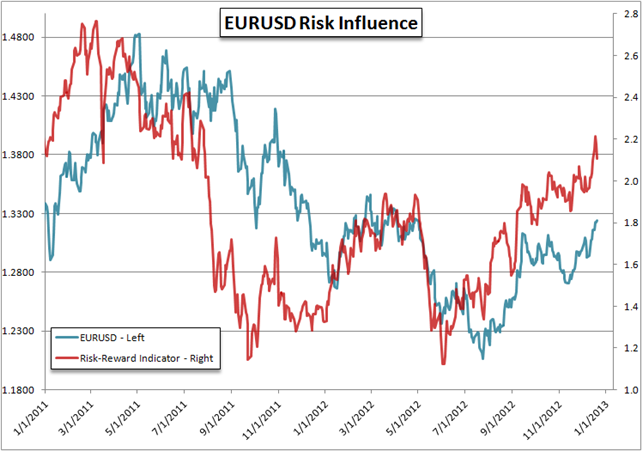 Heading into the first quarter of 2013, risk appetite trends are perhaps the greatest and most important unknown for any and all currency or asset. Rates of return across the globe are near historical lows while volatility measures (as a proxy for fear or insurance demand) are at five-year lows. That creates a tinderbox out of the chances of a more wide-spread economic malaise, a return of financial tension and over-extended central banks. This will not be a quarter to rest on our laurels.

The Euro appears poised for a significant correction higher against the US Dollar. A bullish inverse Head and Shoulders (H&S) chart pattern carved out between July and December has been confirmed with a break above the formation’s neckline. A piercing of falling trend line resistance set from the April 2011 swing top reinforces the case for an upside scenario.

The H&S setup implies a measured upside target near 1.4266. This would put prices in the vicinity of long-term resistance defining the dominant down trend in place since mid-2008, when prices set a record high near the 1.60 figure. I expect this boundary to cap the upswing and mark the resumption of the overall move lower.