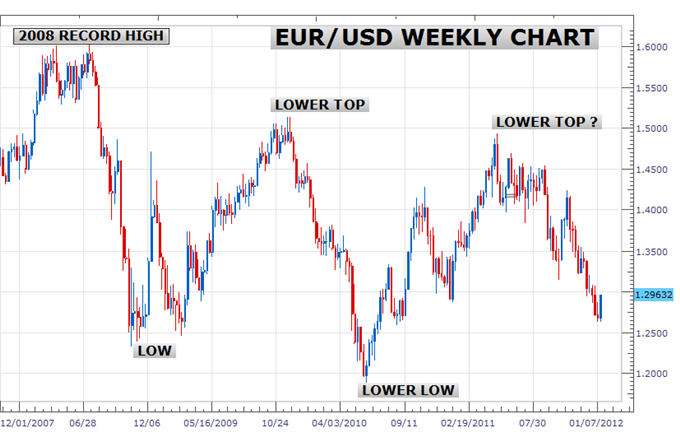 The Euro finds itself at a potential crossroads. Does the single currency zone remain intact and prove that the Euro itself is a viable currency? Do Germany and other core nations come in to rescue the periphery despite significant domestic opposition? As it stands, recent trends plainly point to continued turmoil and further Euro losses. Yet a lot can happen in six months, and it will be crucial to monitor developments in the Euro Zone in the first half of 2012 and how it affects the Euro exchange rate.

We foresee Euro declines in the first half of 2012. How low can we go? Many factors will affect this, but we expect to see Euro/Dollar (EUR/USD) to reach at least 1.20 in the next six months, and perhaps even touch 1.15.

The current European debt crisis started with serious doubts over Greek debt as early as 2009, but 2011 marked the year in which worries over the periphery spilled into the Euro Zone core. Whereas previous debt problems had been limited to the comparatively small Greek, Irish, and Portuguese economies, trader worries transferred into core nations as tensions hit fever pitch.

Investors aggressively sold Italian and Spanish bonds as they doubted the solvency of governments in the Euro Zone’s third and fourth-largest economies. Italy, the Euro Zone’s third-largest economy, has total public debts representing over 120 percent of domestic Gross Domestic Product. With such an enormous debt load, it is important to watch the interest rates that Italy must pay on its debt. If it must pay unsustainably high interest rates – believed to be around 7% for 10-year bonds, which was seen on several days in November and December – Italy may be pushed beyond the point of “no return”. That is to say, it will depend on external aid to remain fully solvent.

What could conceivably put Italy on the right path and stave off a fiscal crisis on a scale few could imagine? The first step must be a credible plan for Italy to meet its debt obligations—likely led by strong fiscal austerity and real commitment to economic reforms to enhance productivity. The new Italian government has announced measures to cut deficits via increased taxes and reduced spending. Of course such deficit-cutting measures are complicated by the fact that the Italian economy remains stuck in a period of extremely low growth. In the period from 2000 to 2010, Italy held the third-lowest GDP growth rate in the world behind Haiti and Zimbabwe.

The short-term budget cutting measures that have been taken thus far have proven insufficient and perhaps even counterproductive. The entire Euro Zone is now expected to enter a recession through the first quarter of 2012, and any aggressive spending cuts and/or tax increases from Spain and Italy could exacerbate the downturn.

The new conservative government in Spain has announced fairly aggressive deficit-cutting measures that have been met with noteworthy improvements in domestic bond prices, and hence lower interest rates. Yet the spread between 10-year Spanish bond yields and the benchmark German equivalent continues to trade near its widest levels since the Euro’s inception. Markets seem more optimistic, but the overwhelming theme is pessimism over the solvency of key Euro Zone governments.

The unvarnished truth is that an orderly solution to Euro Zone fiscal woes seems exceedingly unlikely. Ideally we would see commitments to real structural changes in regional governance. For example, markets might be more likely to lend to Italy and Spain if all Euro Zone nations were prohibited from running budget deficits beyond a certain level. Such rules have existed for years in the form of the Euro Zone’s “Growth and Stability Pact”, but the missing link remains the lack of real consequences for non-compliance. We foresee a continuation of the trend of patchwork short-term solutions that continue to roil financial markets. Such initiatives may involve attempts at Italian fiscal austerity, European Central Bank aid, and/or international aid. Yet the problems of Euro Zone debt and competitiveness will remain significant.

As traders, we will look for opportunities to play ongoing crises through the Euro/Dollar (EUR/USD) exchange rate. Although shorter-term rallies as high as $1.3500 seem possible, the overall trend favors further EURUSD weakness.

As such, our outlook for the first half of 2012 is predominantly bearish while the market adheres to the broader underlying downtrend, and we would expect to see a move towards 1.1875 at a minimum before considering the potential for any meaningful recovery. In the interim, any rallies should therefore continue to be very well capped, with overbought short-term rallies viewed as compelling opportunities to look to build on short positions. Ultimately, only a 2-week close back above 1.3500 would bring this outlook into question and give reason for concern.