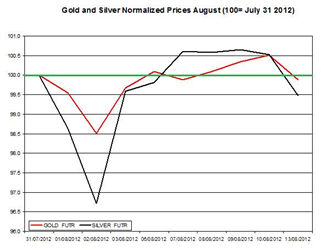 The prices of precious metals, much like many other commodities, changed direction from last week and declined on Monday. The speculations around the future plans of ECB and Bank of China in regards to their respectivestimulus plan could continue influencing bullion traders. Currently, gold and silver prices are rising. On today's agenda: Great Britain CPI, Euro Area GDP 2Q2012, German and Euro Area ZEW economic sentiment, U.S. Retail Sales, Euro Area Industrial Production and U.S. Producer Price Index.

As seen below, the chart presents the changes of normalized prices of precious metals in during the month (normalized to 100 as of July 31st). During August gold and silver didn’t do much.

Euro Area GDP 2Q2012 Report: Euro Stat will also publish the GDP growth rate of the Euro Area. According to the previous report, during the first quarter of 2012, the Euro Area GDP didn't grow (Q-o-Q). This news might affect the Euro; the current expectations are of another a low growth rate or even another contraction for the second quarter;

U.S. Producer Price Index: In the recent report regarding June this index for finished goods edged up by 0.1% compared with May's rate and increased by 0.7% in the last 12 months; this news might affect bullion rates;

Euro Area Industrial Production: in the previous report the EU industrial production was up by 0.6% (M-O-M) during May;

The Euro/ USD changed direction and rose on Monday by 0.35% to 1.2333. Alternatively, other currencies including AUD and CAD depreciated on Monday against the USD. The linear correlation between gold and Euro is still strong: during the month, the correlation between the gold and EURO/USD was 0.558 (daily percent changes). Therefore, if the Euro will trade up against the USD, it could eventually pull up precious metals.

Despite yesterday's fall, bullion rates might resume their slow growth from last week: the upcoming U.S reports including PPI and retail sales could affect bullion prices as indicated above. On the other hand, the upcoming EU reports including German and EU economic sentiment, GDP and industrial production could affect not only the Euro but also bullion rates. If these reports will continue to show little progress in the EU economic activity, it could pull down the Euro, which tends to be positively correlated with precious metals. Finally, if the Euro and other "risk currencies" will trade down against the USD it could curb the rally of precious metals rates.