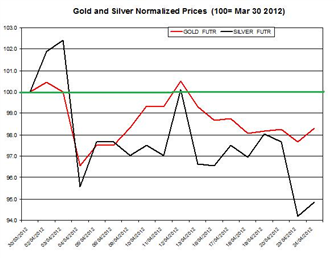 Gold and silver prices didn't do much yesterday but this may change today. The statement of the recent FOMC meeting will be released. Furthermore, the FOMC projection on the U.S economy will also be published. The release of these reports will be followed with a press conference. These events may have a substantial effect on the bullion market as was the case in the previous FOMC meeting. Let's examine the situation and determine how the FOMC may affect the metals market. Additional items on today's agenda include: U.K GDP for Q1 2012, U.S core durable goods report, ECB President Draghi speaks.

Gold bounced back on Tuesday by 0.69% to $1,643.8; silver also increased by 0.71% to $30.82. Today's publications may affect bullion and consequently SPDR Gold Trust (GLD). During yesterday's trading GLD edged up by 0.14%. But as I will explain herein I suspect this direction may change during today's trading.

The chart below presents the developments of both metals during recent weeks (bullion are normalized to 100 as of March 30th).

Statement of recent FOMC meeting: I think the FOMC won't decide on another stimulus plan, especially since the U.S's economic progress is still moving up (e.g. the U.S labor market and U.S GDP are still growing); the FOMC statement may affect the strength of USD and more than that it may also affect metals prices;

FOMC Economic Projection: this report is updated every quarter and includes the FOMC's projection on U.S economic growth and inflation. This projection may also affect the USD;

The Euro/USD also rallied on Tuesday by 0.31% to 1.3197; furthermore, the "risk currencies" which tend to be correlated with metals including the CAD also appreciated by 0.42%. The recent disappointing U.S consumer confidence report and U.S home sales may have had something to do with the depreciation of the USD during yesterday.

The upcoming statement of the recent FOMC meeting and the Fed's economic projection of the U.S may have a substantial effect on the USD and bullion. Since the last FOMC meeting in March, there were several U.S reports that showed some signs of slowdown, most notably the recent non-farm payroll report, in which the labor force grew by only 120k. So the U.S economy might be slowing down. For now I think there isn't enough for the Fed to come up with another stimulus plan. Therefore I speculate bullion will decline during today's trading.

For further reading:Gold and Silver Weekly Outlook for April 23-27