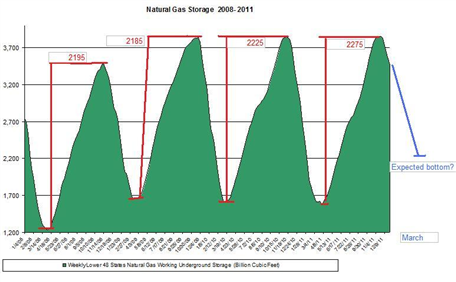 Following the recent sharp declines in natural gas prices, some might ask will this downward trend continue. In this week's market analysis Itai Furman asks and answers will natural gas hit $1?

The slide in NG prices is primary a result of technology improvement, mainly the ability to dig horizontally that practically gave US ample supply for the next 100 year. Never the less, the last 6 month drop is impressive and seems to be more than just the long term bearish fundamentals.

The current problem in Gas market is the collapse of demand, but the major medium term threat is that gas storage will hit its limit capacity of around 4,100 Billion cubic feet. NG is a cyclical commodity. In the winter the storages are depleted and in the summer they are rebuild. The rate of formation is quite constant with slight increase YoY. In 2008 the formation reached 2,195, in 2009 it was 2,180, in 2010 it hit 2,225 and in 2011 summer around 2,275 billion cubic feet were formed. 2012 build up will probably be around 2,300 or so.

If we subtract this build-up from the maximum capacity we reach our "magic number" for the current winter – 1,800. If by March total gas in storage will be above this number, expected build-up will probably breach the maximum storage capacity. So, the million $ question is, will we reach it?

If the current depletion rate will remain for the rest of the winter, storage level will bottom down at 2,500, well over our magic number and a level that will result in a capacity breach. But, it is unlikely to believe that the winter will remain that warm. If weather will return to "normal" and the usual draw will return, we will reach 2,300, still way too high. Actually, in order to reach our 1,800 target or even to get close to it, the winter should be very, very cold and it has only 2 months to do that. This is a very unlikely scenario.

So, in order to avoid breaching the maximum capacity, production will have to be cut, but who will cut in production in such a competitive market?

In the midst of the 2008 crisis, oil prices collapsed and then recovered only after OPEC had cut production by several million barrels of oil per day. The Gas market in the US is every thing but a cartelistic and therefore such coordinated cut in production is highly unlikely. Nevertheless, at the end, there is a price where the Gas Companies would prefer not to produce anything. Estimates for that cost are as low as $1 although some producer costs are higher.

As hard as it to believe it, Natural gas can hit $1. Actually unless temperature will drop considerably, by March we will probably be well above 2,000 billion cubic feet in storage, and when the build-up will start, every one will do 1+1 and will reach the conclusion that current prices are too high. Probably, the short term contracts will be massively dumped and the price can drop well below $2 toward the $1 mark or even lower if speculative selling will occur. 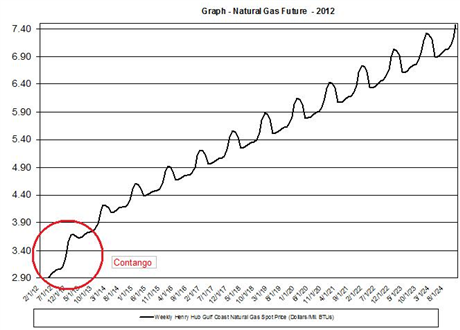 Under these circumstances, a straight short seems a reasonable strategy (short UNG), but a better one might be to short the April-November contracts, hoping the capacity breach will send short term gas prices toward $1, and go long on the December 2012 – March 2013 (The "winter" contracts) ones where prices should recover as demand increases. Naturally, the market is quite smart and the contango increased considerably, probably as hedge funds followed the same logic and position them-selves accordingly. Current short contracts are trading in $2.7-$3 and the summer contracts are trading around 3.7$, but this seems a little price to pay.