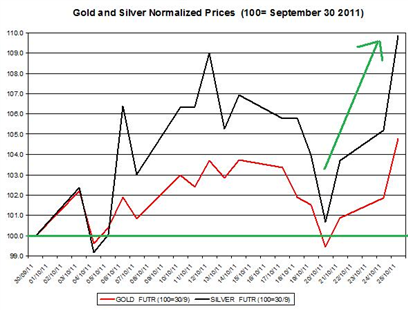 Gold and silver sharply rose yesterday and recorded the sharpest gains during October. Does this mean there is a shift in the recent trend of gold and silver from downward to upward? Today, the second (this week) EU summit will be held in Brussels; in the summit there will an attempt to resolve the European debt crisis. The U.S Core Durable Goods and U.S New Home Sales reports will be published today; BOJ's Rate will be announced.

Today, the second of two EU summit will be held (the first one was held back on Sunday). This will be the 14th EU crisis meeting in the past 21 months and will include representatives from all 27 European Union countries.

There are still crucial issues left open including how to boost the EFSF, reducing Greece's debt burden and recapitalizing European commercial banks.

In regards to the Greek debt there are gaps between the EU leaders and private sectors banks: the former consider there should be at least a 50-60% hair cut on the Greek debt, while the latter offer only a haircut of 40% on the debt.

U.S Core Durable Goods: This report will present the changes in orders of durable goods in the U.S. in the manufacturing sector in September. During August 2011, manufactured durable goods fell by $0.2 billion to $201.8 billion;

U.S. New Home Sales:in the recent report (August 2011), the sales of new homes reached an annual rate of 295,000 – a drop of 2.3%; if this downward trend will continue, it may only further indicate a slowdown in the U.S real estate market;

slightly declined on Tuesday by 0.16% to reach 1.3908; other currencies also were traded down against the USD including CAD, and AUD. Gold and silver continued their rally and sharply inclined on Tuesday – this was the third straight business day they rose; gold and silver continue their rally and are traded up. Today's EU summit might bring some ease to the financial community if the people involved there will reach an agreement; alas in the more likely scenario there won't be an agreement, and thus the uncertainty level will remain high. This may help with the ongoing rally of gold and silver. Today's U.S. reports might shed some light on the progress of the U.S. economy and if they will show a slowdown, it could also help push traders towards safe haven investments such as gold, silver and U.S. treasury bills.

For further reading:Weekly Outlook for October 24-28