Price action is often deceiving. While there is little arguing that the market defines what is fair value for an asset or underlying risk premium itself; this is an assessment that is valid for only that particular point in time. While speculative interests are prevalent in the capital markets, their influence is biased and highly reactive. This is why there are periods of remarkable volatility and aggressive trends. It is important to keep this truism in mind when evaluating the performance of the market’s this past week. It would seem that investor sentiment has improved markedly over this period. Indeed, the Dow Jones Industrial Average, the S&P 500, Europe’s benchmark indexes and others climbed for six consecutive days (a trend broken today). Looking at other risk and growth-sensitive markets, the same advance in yield and increased tolerance for risk was noted. Furthermore, the statistics that are derived from this underlying price action would offer self-fulfilling support. For example, the risk premium priced into volatility indicators and other derivative readings similarly point to a reduction in the threat of future losses.

It should be clear to those traders that have survived the market swings of the past couple of years that trends are not permanently set and that speculative interests can turn rather quickly. If we were to trust what price action is telling us now, we could find the evidence for why this progress is able to develop. One of the most readily available explanations for strength is that the fear of an imminent collapse of the European Union’s financial ties and currency are on the verge of collapse has dissipated. A correction under these bearings is not unusual. In fact, it is a strong sign that speculators were overzealous in pricing in a disaster for the euro; when the full breadth of the problem would not be realized for many months and through many governmental efforts to redefine the rules of the game. This natural correction therefore can be taken as a sign that risk appetite is recovering in earnest across the board; when in fact, it is a reversal of positioning that is natural for capital flows. On the other hand, that does not mean that the capital markets are returning to a structural bull trends. Instead, this can be termed a correction in a larger trend until fundamentals and investor commitment confirms otherwise. We can see this argument in price action itself. Setting the upswing of the past week into context, we can see with both the Dow and DailyFX Carry Trade Index that we could still easily establish another lower peak.

If we are to see a cap to the current drive in risk appetite and a resumption of speculative fund withdrawal and an increase in bets against growth and yield expansion; it would likely come through the true fundamental trends underlying the market. There is no lack of kindling for igniting fear where uncertainty currently exists. Just as easily as it is interpreted as a catalyst for confidence, the developments in Europe can be labeled a sign for future troubles. While a number of European Governments have found they are able to access the capital markets for funds in debt auctions (Germany, Spain, Italy, Portugal and Greece), the rates they are drawing cannot be endured for long. What’s more, there have been numerous signs of deterioration that have been ignored. Included in this list is a downgrade for Portugal and news that private Spanish banks have had to take 126 billion euros worth of loans this past June. Clearly conditions are not very conducive to growth and investment in this region. And, the deterioration doesn’t stop there. Readings of economic activity have slowed across the board (most notably so far in China’s 2Q GDP reading). Stimulus is being pulled from those nation’s with the biggest contributions to expansion. What’s more, the threat of a new crisis is always present with China, the emerging market sector or even sovereign credit risk. The fundamentals are there; but speculators will determine the timing of swings. 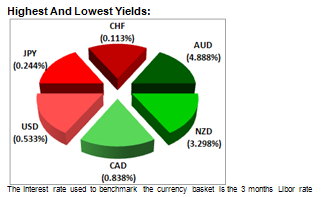 All that is needed to understand the carry trade concept is a basic knowledge of foreign exchange and interest rates differentials. Each currency has a different interest rate attached to it determined partly by policy authorities and partly by market demand. When taking a foreign exchange position a trader holds long position one currency and short position in another. Each day, the trader will collect the interest on the long side of their trade and pay the interest on the short side. If the interest rate on the purchased currency is higher than that of the sold currency, the result is a net inflow of interest. If the sold currency’s interest rate is greater than the purchased currency’s rate, the trader must pay the net interest.

Written by: John Kicklighter, Currency Strategist for DailyFX.com.
Questions? Comments? You can send them to John at jkicklighter@dailyfx.com.