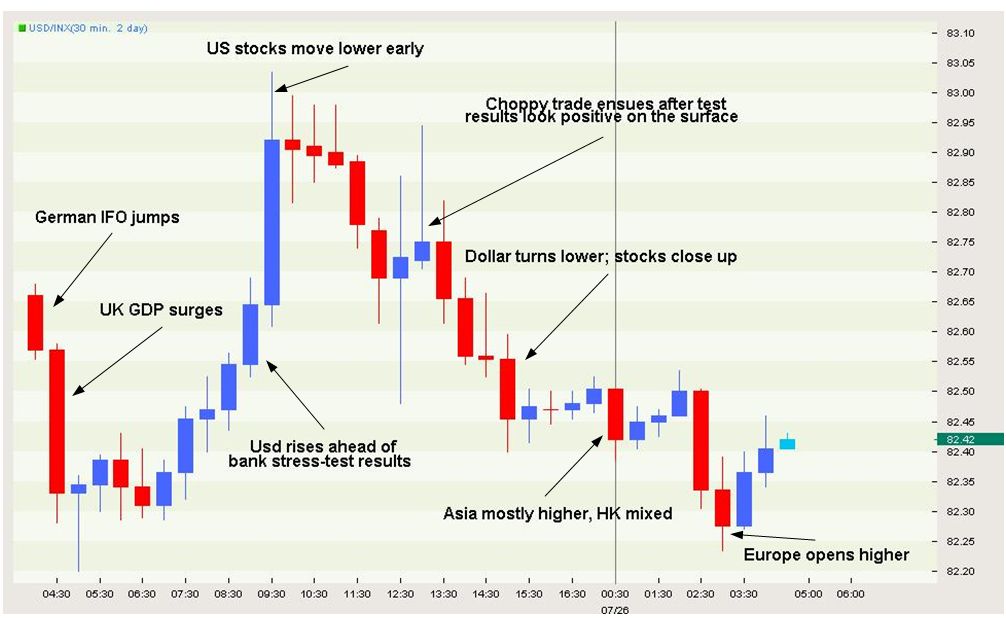 The general consensus and feedback in the two weeks leading up to the stress test results was quite positive, so it wasn’t much of a surprise to see the results come out on the upbeat side.

Relative Performance Versus USD on Monday (As of 10:25GMT) –

However, the major concern heading into the tests and now after the tests is that the tests were way too lax and have helped very little, if at all, to instill a higher degree of confidence in the European banking system. The tier 1 capital ratio requirement of 6% seems to be quite low, and this compares to a Swiss tier 1 capital ratio of 8% in their latest banking tests. It is quite clear from the results that there were a good number of banks that would have failed the European stress tests had the tier 1 ratio been just a little higher, and this clearly casts a major shadow of doubt on the effectiveness and validity of these tests.

Many investors will argue that when the US stress tests were released last year, they were also somewhat lax and suspect, and yet the markets managed to recover quite impressively still. As such, even some form of clarity in the European banking system should help to bolster investor appetite. We are not as convinced of this logic, as the positive market reaction following the US stress tests could just as easily have been attributed to policy assurances from authorities in the US that no bank would fail.

In our opinion, the Euro should be exposed to some weakness, at least over the next few days, with all of the positives having already been priced in and plenty of question marks surrounding the drive behind the latest surge in the single currency. Over the medium-term, as the stress tests fade out of the headlines, it will become much more difficult to determine longer-term direction. The US is also clearly riddled with some deep structural issues that have crept back in over the past several weeks, and given that the yield differential between the Euro and USD is more or less a wash, the currency which benefits the most will be the currency which can show the greater likelihood for a quicker sustained recovery.

Elsewhere, Treasury Secretary Geithner was on the wires over the weekend saying that the US economy was not likely to slip back into recession, but that letting tax cuts for the wealthy expire was a necessary step to help with the reduction of the budget deficit. Data released overnight was all in Asian trade with UK hometrack slightly softer than previous, Japan trade fairly in line, and Australian PPI much softer. However, none of these release have factored into price action thus far.

Looking ahead the Chicago Fed national activity index is due at 12:30GMT, followed by new home sales (315k expected) at 14:00GMT. Dallas Fed manufacturing (0.0% expected) caps things off at 14:30GMT. On the official circuit, the Treasury’s Brainard speaks in Washington at 16:00GMT. US equity futures and gold prices are relatively flat, while oil tracks moderately lower.