It seems there is a concerted effort by US officials afoot to leverage some speculative enthusiasm to counteract the shaky ground the markets have found themselves on lately. While there were a number of critical fundamental threads being pulled this past session through headlines, the baseline trade wars continued to blot out any distractions. Of course, the primary interest remains with economic collision course on which the United States and China remain. There were reports suggesting the United States was preparing a delegation to return to China next week to pick back up the fractured talks that broke off last week before the US upgraded the tariff rate it placed on $200 billion in Chinese goods from 10 to 25 percent followed by China's retaliation of a 25 percent tax on $60 billion in US imports. Asked to confirm these rumors, however, Treasury Secretary Mnuchin would not commit. This remains the most costly burden on the course of the global economy but the 'three to four weeks' President Trump gave before they plan to expand the tariffs to the remaining suite of Chinese goods making their way to the country (said to be $325 billion worth) offer some time before the impact if truly felt.

In the meantime, there was an unmistakable improvement in the sentiment surrounding an existing trade conflict and a potential tidal change in an impending threat. For the former, negotiators agreed seemed to agree to a rough outline for a USMCA (US Mexico Canada agreement) that would replace the NAFTA accord a few months ago, but the US Legislature seemed to consistently rebuff the President's replacement. The hold up seemed to be the refusal by the Trump administration to remove quotas on steel and aluminum tariffs that were instituted over a year ago to start the global trade wars. Wednesday, it was reported that US Trade Representative Lighthizer was presenting a proposal to Mexican and Canadian officials that would lower the commodity tax and smooth trade relations. Interestingly, neither USDCAD nor USDMXN seemed to respond significantly to the news. Is it skepticism or is this outcome already priced in? 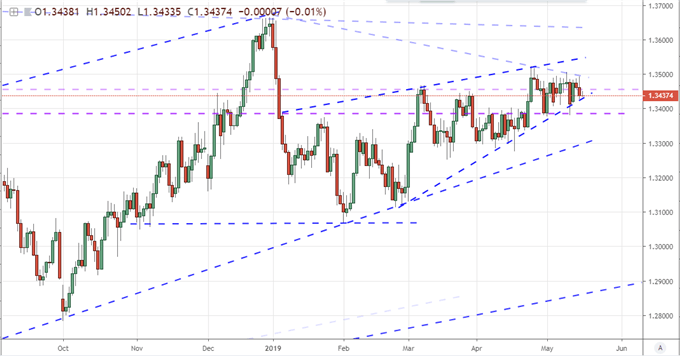 Looking to avert a further escalation of trade wars, the most promising leak on the day was signal that President Trump would decide at Saturday's deadline on the 90-day review period on the Commerce Department's Section 232 review of auto imports to delay for six months. At its core, this is only a deferment of a future risk, but the market's are already under trade war pressure, so that is still viewed as an improvement. As the rumor spread through the New York morning trade, the German DAX surged as did the afterhours trade for Japan's Nikkei 225. Europe and Japan stood to absorb the biggest hit from such a shift in trade wars. That said, there was a notable lack of response from EURUSD, USDJPY and the US indices. There is good reason to hard skepticism, but is that what the US market's lack of response reflects? Or perhaps we are witnessing recognition that sentiment simply has run out of relief rally... Taking a look to risk-leaning assets outside the specific Germany subset, there was a sense of balance that didn't really hit the tenor of genuine enthusiasm. Perhaps that is due in forthcoming sessions. From the S&P 500, we were met with yet another gap lower on Wednesday's open. That is the 7th time in 8 trading days that the benchmark index has opened to a significant drop - the most troubled mix for opening moves since the tumult of February 2018. Ultimately, the day's performance would cover the gap and more with notable gains that fell just short of a tipping confidence that a short-term recover was in place. Having slipped little more than 5 percent from record highs, the picture is very different for the S&P 500. Looking at similar patterns for other major risk benchmarks that so happen to be trading far from their early 2018 record/multi-year highs, it is difficult to generate the same degree of enthusiasm. My greater concern is the disparity between speculative dependent assets that capitalize on momentum versus those assets with a sentiment bent that also abide by growth or traditional economic backing. A good example is the contrast that the most liquid sovereign debt yields hold to the US stock indices. 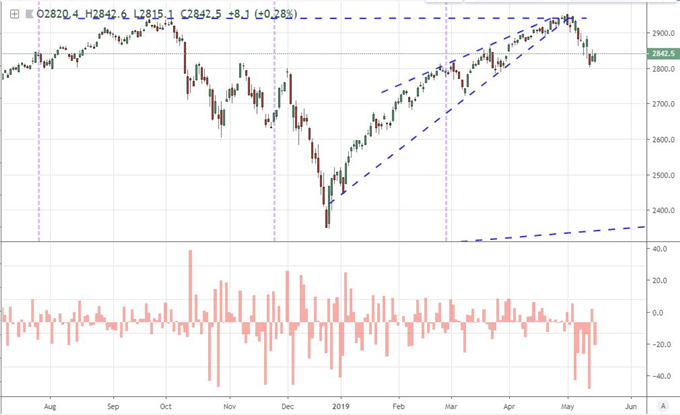 More likely than not, the divergence in speculative assets is the result of deteriorating conviction behind an unquestioned risk appetite. There are certain technical advantages - such as the minor benefit found from being the instigator of trade wars - that can amplify tepid performance into a genuine jump. However, such prompts rally prove reliable. Skepticism puts the emphasis back on the laundry list of fundamental shortcomings for which this global market continues to contend. On global growth considerations, the United States reported a contraction in retail spending and industrial production while China printed troubling April figures for fixed assets, industrial production and retail sales of its own. On the political risk front, the US-Iran threats continue to build with the US withdrawing embassy staff and rumors that 120,000 troops may be deployed to the region presents fundamental instability that cannot be ignored.

Chart of US Crude Oil and 10-Day Historical Range (Daily) 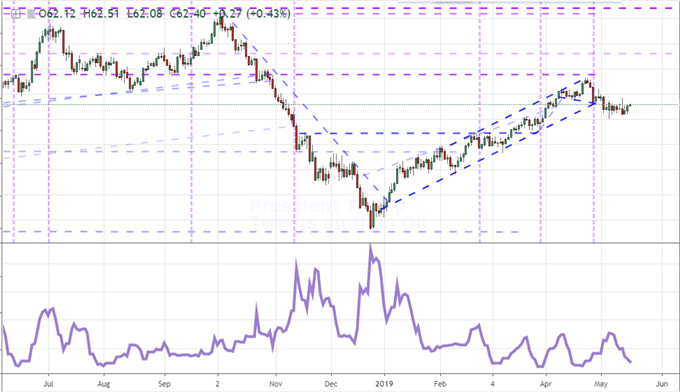 As the big picture themes work through the market's digestive system, do not be surprised if key assets show more indecision than commitment. The EURUSD for example is very likely to remain of the most indecisive lightning rods for speculative appetite. The Greenback has neither the extreme risk aversion to prompt its intense safe haven status while its yield advantage bears little fruit with rate forecasts through year end dropping to their lowest levels since January 2018. For the Euro's part, there is simply too much to anticipate. There is traditional event risk ahead that includes Eurozone and Italian trade figures. My focus will be on the Eurozone finance ministers meeting though as they will weigh in on more systemic issues - like Brexit and Italy. Italian 10-year govenment bond yields continue to climb amid concerns that the government is gearing for a fight against European limits on debt in a bid to pump up a painful growth forecast. That has already raised the ire of EU officials and stirred to life concerns over the stability of the shared currency. Looking ahead, the EU Parliamentary election carries serious weight on this front, and will act to throttle deep Euro moves. 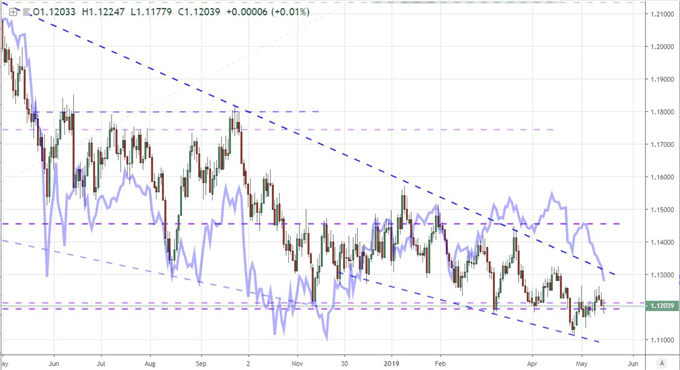 There will be similar restrictions to account for when it comes to the Pound and Australian Dollar ahead. Yet, at least these hurdles are not so convoluted. For the Sterling, the threats are building in the government to force Prime Minister May to break an impasse by presenting her Withdrawal Agreement, but it is still very likely the effort fails. That makes the calls for May to set a date to receive Brexit deal approval or step down all the more intense. In turn, the early June time frame for the vote is a strategic maneuver that may hold her position for longer while also posing an issue for the Sterling to gain clear traction. From EURGBP, we have seen an incredible 8-day rally that breached range resistance, defied retail anticipation and marked the longest climb since 2011. Manage expectations. As for the Aussie Dollar, the economic connections to China are impossible to miss - but the open market nature of the currency means AUDUSD is probably a better reflection of trade wars than USDCNH. The employment and inflation expectations figures this morning may prompt more meaningful response from this currency, but consider that versus risk trends. 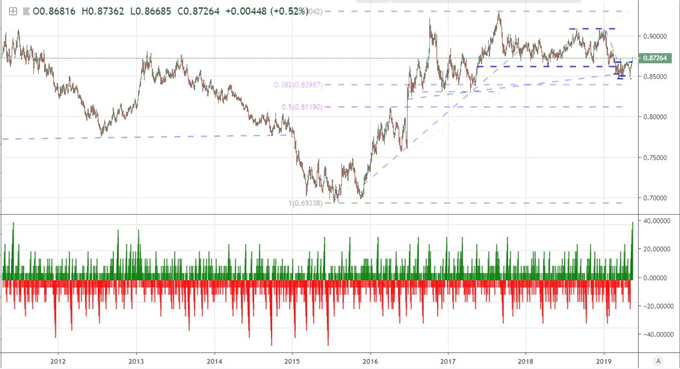 Two other currencies worth keeping tabs on, the Canadian Dollar is facing some discrete event risk in the previous month's capital flows and the Bank of Canada's financial stability report. That could prompt volatility, but I retain my expectations to trade war or crude oil response. USDCAD has held stubbornly to its range - a reflection of the Loonie's temperament - and I think a break is probable and even likely. Trade wars is just as much a caveat to Mexican Peso movement as its Canadian counterpart, but the Bank of Mexico rate decision on tap Thursday could render a more targeted fundamental charge to override the restraint. Keep USDMXN in your review for the coming session. We discuss all of this and more in today's Trading Video.