The Canadian Dollar was the best-performing major on Wednesday, bolstered by a couple of optimistically-interpreted updates regarding global trade news. Firstly, there was a general pickup in sentiment after US President Donald Trump said that he was planning to delay imposing auto tariffs for up to 6-months. This helped boost equities across the board.

Secondly, US Treasury Secretary Steven Mnuchin later in the day noted that the United States, Canada and Mexico are nearing a deal to remove metal tariffs. This is a sticking issue regarding the USMCA, which is the alternative to NAFTA, that still needs to be approved by Congress. Combining these events helped to boost sentiment-linked crude oil prices, with CAD brushing off a mixed local CPI report earlier in the day.

USD/CAD thus once again struggled to break above resistance between 1.3469 and 1.3445 in what appears to be false upside breakout noted earlier in the week. This leaves prices looking at near-term support again at 1.3390 which if cleared, opens the door to testing congestion support between 1.3291 and 1.3251. The latter has done its job at keeping prices in congestion mode since March. 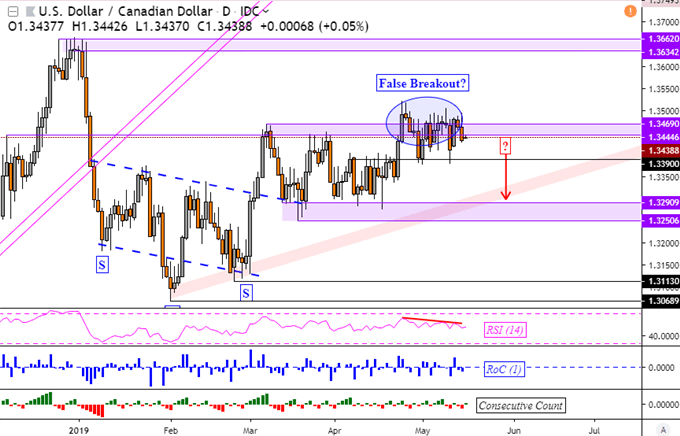 Despite the shift in market optimism, the pro-risk Australian and New Zealand Dollars still underperformed. The anti-risk Japanese Yen was only little changed across the board. This likely owed to the downside gap in the S&P 500 on Wednesday and that European benchmark stock indexes sunk shortly after opening for trade. These are volatile times for not just equities, but also currencies given the uncertainties of trade wars.

It is unclear if Asia Pacific equities can follow-through and echo gains from Wall Street. S&P 500 futures are little changed with slight downside bias. Chinese equities could be in for a rough day after Trump signed an order based on national security grounds that could restrict US businesses from using telecommunications equipment that may pose a threat to security.

While not targeting any specific company, this is anticipated to restrict Chinese firms such as Huawei and ZTE Corp, from US endeavors and it may complicate ongoing US-China trade talks. If there is ‘risk-off’ trade to come, the anti-risk Japanese Yen may accelerate gains that we have seen in recent days. The sentiment-linked New Zealand Dollar could be vulnerable.

Meanwhile, the Australian Dollar will be awaiting the upcoming local jobs report. This is data that has recently increased in importance after the RBA, after leaving rates unchanged last week, emphasized improvements needed on that front for inflation to be consistent with their target. Australian economic news flow has still been tending to outperform relative to expectations. Thus, AUD/USD may find support on this data.

Join me as I cover the Australian jobs report LIVE and the reaction in AUD/USD where I will also be taking a look at what else is instore for Aussie crosses ahead!