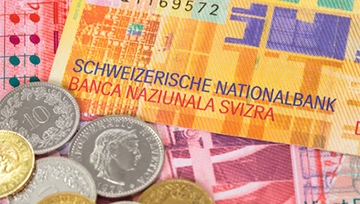 -USD/CHF nears the end of its two-year triangle consolidation

Range bound trading is not unusual for Swiss Franc. Though range trading is typically viewed as ‘boring’ trading, there appears to be some Swiss Franc opportunities on the horizon. In this report, we will look at the longer term Elliott Wave patterns for USD/CHF, EUR/CHF and GBP/CHF.

Join Jeremy on Wednesday January 3 for a webinar discussion of these three markets plus forecasts on GBP and JPY pairs in 2018.

USD/CHF has been stuck in a sideways consolidation for the past two years. It looks like an Elliott Wave triangle consolidation that is nearing its terminal point. We know from our triangle lessons that the (E) leg would need to hold above the (C) leg (.9420) to remain a valid triangle. Therefore, traders can look for buying opportunities when the bearish zigzag wave (E) ends.

If USD/CHF does end up breaking below .9420, then the triangle pattern is negated. At that point, the door is open for additional losses down to 87-91 cents in a large ‘B’ wave that began December 2016. 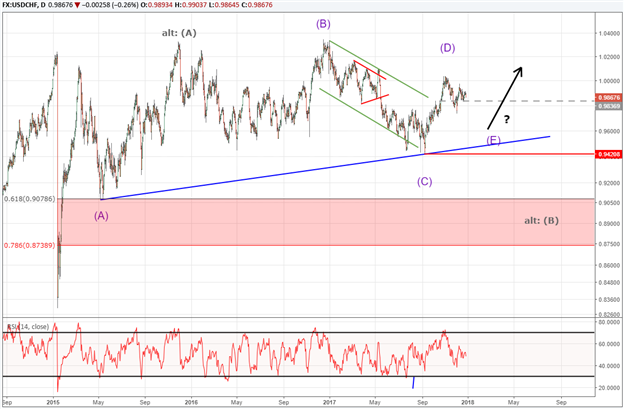 EUR/CHF is starting to look toppy on a smaller wave trend. We can count nearly complete waves to the upside. However, wave relationships on a larger scale are lacking so we keep an open mind that EUR/CHF may simply be rising in a small degree ‘b’ wave. This would imply that after a brief correction lower, prices might resume their climb higher.

Support emerges in the 1.13 to 1.15 price zone for EUR/CHF. A strong advance through 1.18 indicates we may be in a 3rd of a five-wave impulse higher. Longer-term wave relationships appear near 1.22 for the terminal fifth wave advance. 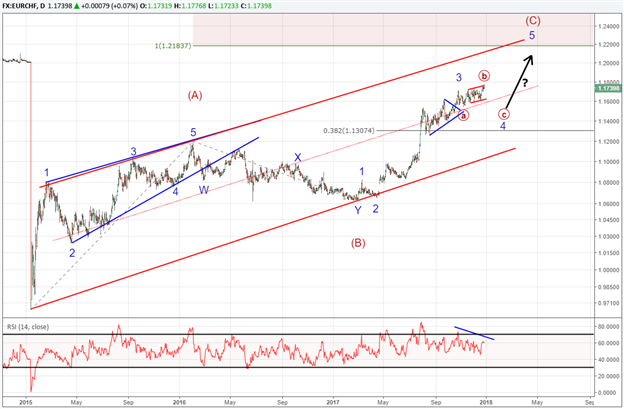 GBP/CHF is Rejected at Channel Resistance

Another Swiss Franc market of interest is GBP/CHF. This market has worked higher and reached the upper portion of the trend channel. We think this is a corrective price channel the eventually becomes completely retraced. If that were to take place in 2018, we think it would result from pervasive Sterling weakness.

On smaller degree of trend, we can see an ending diagonal. So long as GBP/CHF remains below 1.3540, the diagonal hints at losses towards 1.2750. If the wave higher than began October 2016 is complete, then a retracement back to 1.22 is possible. Heavy divergence is visible on the Relative Strength Index suggesting this market is weak. 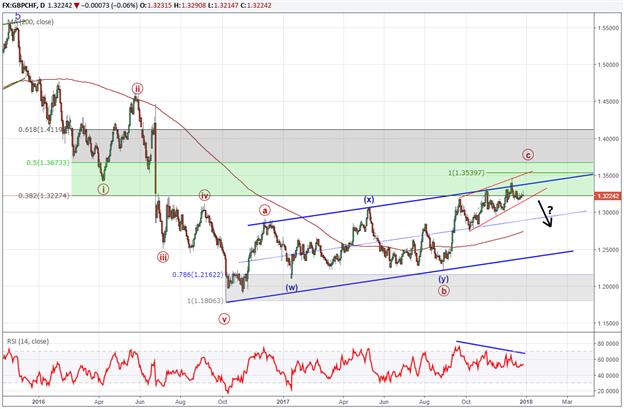 Learn the basic terminology and patterns with these beginner and advanced Elliott Wave trading guides.

Jeremy is a Certified Elliott Wave Analyst with a Master’s designation. This report intends to help break down the patterns according to Elliott Wave theory.

Interested in more in depth study on triangle patterns? Start by viewing this hour-long webinar recording on how to identify and trade triangles. (Registration required)

Register and watch the one hour long “What to Watch 4 Part 1” webinar where the forecasts were shown for Gold, Oil, EURUSD, and the commodity currencies.