Elliott Wave Theory is my favorite style of analysis in that it has a small set of rigid rules, several guidelines, and a limited number of patterns to follow. If you can identify the patterns correctly, Elliott Wave theory can provide a road map on the maturity of the current trend with key levels that stop the analysis.

My goal with these Elliott Wave resources is to help you build a foundation to view the Elliott Wave counts that myself or others share with some discernible wisdom. If can you view Elliott Wave counts and determine their credibility by more deeply understanding the style of analysis, then perhaps it can keep you out of some losing trade ideas. If you can see an Elliott Wave count and clearly identify trend potential, key levels to exit while following the habits of successful traders, then my hope is you’ll see more consistent trading.

Today’s topic is impulse waves. If you find today’s lesson to be a bit confusing, no worries. Impulse patterns and zigzag patterns are the two most common waves found in Elliott Wave theory. Therefore, if you can learn about these two patterns, you will have a strong Elliott Wave foundation to build on. (At the bottom of the article you will find additional Elliott Wave resources.)

What is an impulse wave?

Notice how there are two different breaks of similar size in the trend approximately 1/3 and 2/3 of the way through the trend. Those breaks represent waves 2 and 4 of the impulse. Finding a trend with breaks like that is an oversimplified way of identifying an impulse from afar. 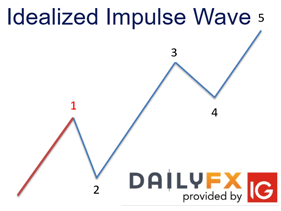 Here is an example of a bullish impulse on USD/JPY.

There are three rules associated with impulse waves.

Many times wave 2 retraces between 38-78% the distance traveled of wave 1. Use the Fibonacci tool in your charting package to calculate those ranges. A common stopping point for wave 2 is near the 61.8% level. It is possible that a wave 2 retracement is deeper than 78%, (though it is uncommon) and wave 2 can never retrace 100% or more of wave 1.

How to Trade an Impulse (Part 1)

As a result, when you see traders anticipating the end of wave 2, many times they will enter in the 38-78% retracement level while placing a stop loss at the origination of wave 1. If the proposed wave 2 does retrace more than 100% of wave 1, then the wave labeling is incorrect and some other pattern is playing out. 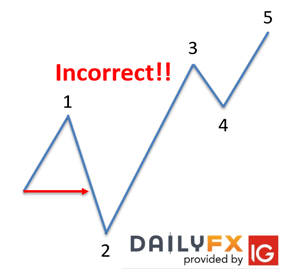 This is a rule that can confuse newer Elliott Wave technicians so it is important to study it closely. If you find an analyst/blogger confusing this rule, then it is a tip off to their Elliott Wave experience level.

If you think about the characteristics of the impulse, if wave 1 is the start of a new trend then many participants have not recognized that as the new trend. They think it is a correction to an old downtrend.

Then, if wave 2 is a partial retracement to that trend, you have this push-pull relationship between those who are jumping into the new trend early versus those who are still hoping for the old trend to continue.

At that point, it is during wave 3 when the new trend is typically recognized. As a result, wave 3 tends to be the longest and strongest of wave 1, 3, 5. However, wave 3 does not have to be the longest wave of 1, 3, and 5. The rule here clearly states wave 3 cannot be the shortest of waves 1, 3, 5. Where amateurs make the mistake is thinking that wave 3 has to be the longest, which is incorrect. 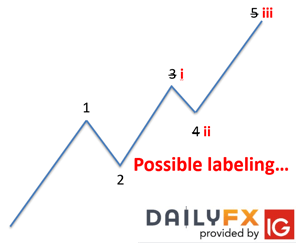 However, one can still make beauty out of ashes. If you see an analyst mislabel a wave 3 as the shortest of the proposed waves 1, 3, 5, one way to correct the labeling is to determine if wave 3 is extending. Since the market is fractal, wave 3 is also be made up of a smaller degree impulse wave. Therefore, within wave 3, we can label the smaller degree as roman numerals and begin to count out five waves while following all of the rules above. In the image above, wave 3 is still incomplete to the upside as waves iv and v within wave 3 still need to form.

Since an impulse prints in the direction of the near term trend, the corrective waves (waves 2 and 4) should not interact with one another. Essentially, the trend is so strong that attempts of counter trend moves to cut into the trend are shallow and do not overlap.

How to Trade an Impulse (Part 2)

The second best place to trade an impulse is anticipating the end of wave 4. Many times wave 4 retraces approximately 38% the length of wave 3. Therefore, use the Fibonacci tool embedded in our charting package to measure out that 38% level.

Another guideline to watch for when trading the end of wave 4 is that wave 4 tends to alternate in shape relative to wave 2. Therefore, by this point in the sequence, we know what wave 2 is. Therefore, we can anticipate the opposite for wave 4 and follow that shapes patterns to conclusion.

If entering a trade at the termination of wave 4, place the stop loss 1 pip inside the wave 1 ending point. If wave 4 does overlap, then you are stopped out of the trade and some other pattern is at play.

There are a several possibilities for altering our labels if we do find ourselves counting a wave 4 overlapping with wave 1. Perhaps we have an extended wave 3 still carving meaning that wave 4 has not printed yet. Maybe a diagonal pattern is taking shape. Alternatively, this wave is a complex corrective pattern (which is the most likely culprit). In conclusion, I hope you found this article helpful in improving your understanding of Elliott Wave theory. Impulse waves and zigzag waves are by far the two most common patterns. Therefore, if you spend your time studying these patterns, you should be able to identify some trading opportunities without much study on the other patterns.

We have other resources to help you further your study on the Elliott Wave patterns and how to trade them. We have a beginner and advanced Elliott Wave trading guides that covers the common patterns.

Jeremy Wagner is a Certified Elliott Wave Analyst with a Master’s designation. You can follow his Elliott Wave analysis via regularly published articles and through his US Opening Bell webinar.