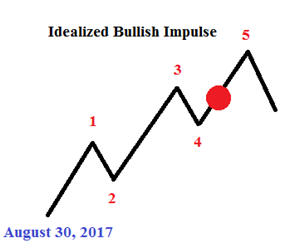 Crude oil prices have quietly rallied while the Bitcoin moves steal the headlines. It appears as though a minor degree triangle pattern has ended as crude oil now presses recent highs. If our Elliott Wave count is correct, this move higher is a terminal wave that once it exhausts, could be retraced early in the new year.

Do you know why traders typically fail? We demystify this in our Traits of Successful traders research.

It appears crude oil prices are thrusting higher out of a triangle pattern in a fifth wave of an impulse wave. Using wave 5 measuring techniques one wave relationship shows up near $60.60 per barrel. Look for this wave 5 to subdivide in motive fashion (either as an impulse or as a diagonal). We can also anticipate divergence appearing on an oscillator like Relative Strength Index, which is typical in a fifth wave.

We feel confident in the wave 4 triangle interpretation because in an impulse, wave 4 tends to alternate with wave 2 in the type of wave. Wave 2 was a zigzag wave and wave 4 is a triangle, which fits that guideline of alternation.

Bottom line, we are in a terminal or ending wave of the 4 months advance. Crude oil price may find a terminal point near $60.60 though it does not have to. 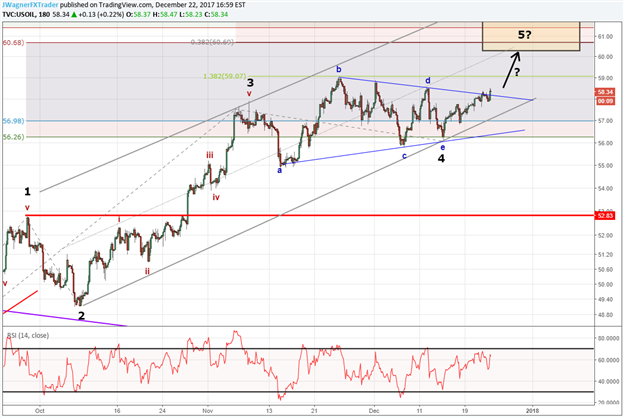 Jeremy is a Certified Elliott Wave Analyst with a Master’s designation. These articles are designed to show Elliott Wave analysis in the live market environment for educational purposes.

Discuss this market with Jeremy in a special year-end webinar on December 27 “What 2 Watch 4 in 2018”.