The Elliott Wave forecast for crude oil prices show a mature up trend and that a significant portion of the previous two year up trend may be retraced.

The crude oil Elliott Wave analysis on the weekly price chart shows a bearish pivot may be occurring near current levels to retrace a significant portion of the previous two-year uptrend.

On a weekly crude oil price chart, the Elliott Wave pattern we are following is that the current rise from the 2016 is a wave 4. We are showing this fourth wave as subdividing as a double zigzag pattern labeled W-X-Y. This pattern in general is a bearish pattern and suggests a deep correction may be on the horizon for crude oil prices.

An Elliott Wave double zigzag pattern is simply two zigzags joined together by another corrective pattern labeled ‘X’. In this case, the ‘X’ wave is a clear triangle pattern. Within this double zigzag pattern, wave ‘Y’ is equal in length to wave ‘W’ near $71.18. This is a common relationship between the W and Y waves. We displayed this relationship earlier this week while crude oil prices continued their up trend. 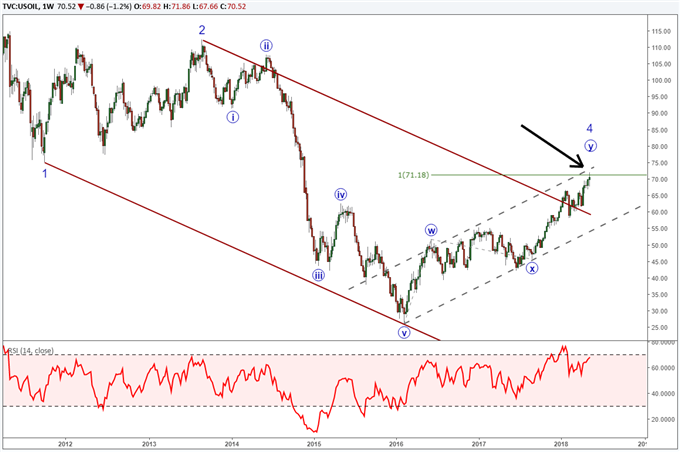 Dialing in to shorter time frame charts, we can see an Elliott Wave chart that is nearing its terminal point if it has not reached it already.

Using Elliott Wave Theory, wave ‘Y’ in a double zigzag would need to be a zigzag pattern. There is some question as to the shape of wave (b) of Y so we will share with you two higher probability patterns. 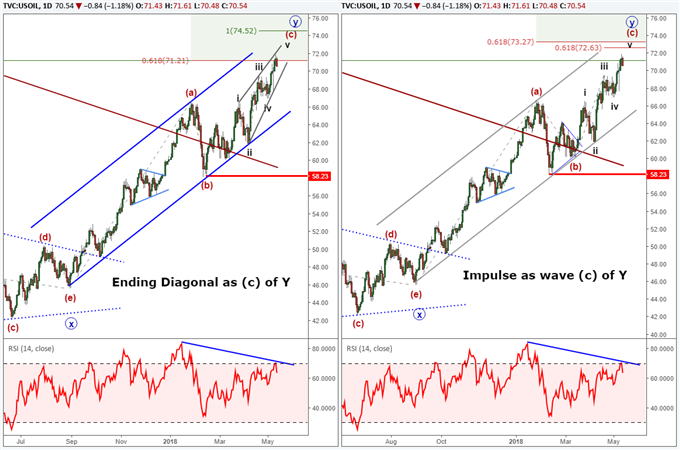 The first one is a very bearish scenario depicted on the left side above. This shows wave (b) of Y as a sharp correction that ended on February 14 followed by an ending diagonal pattern higher. Ending diagonal patterns can appear at the end of a long trend and signals a tiring trend.

Using the rules of the Elliott Wave principle, we can place a maximum price potential of this pattern at $74.52. If crude oil prices press beyond $74.52, then another pattern is at play and the diagonal is eliminated.

Since ending diagonals appear that the end of a long trend, they can signal a swift reversal may be on the horizon back to the beginning of the diagonal. In this case, the diagonal began at $58.23 though a deeper correction can take hold.

On the right side of the chart above, we show wave (b) of Y as another triangle pattern. Under this scenario, wave (c) would be labeled as an impulse wave that may delay the top and reversal as wave ‘v’ of the impulse could extend higher.

A couple of wave relationships are appearing between $72.63 and $73.27 though we cannot rule out even higher prices. $58.23 is the key level to this pattern in that once it is broken, the odds will shift that wave ‘Y’ is finished.

After wave ‘Y’ prints, a deep retracement typically occurs. It could be another ‘X’ wave or a deep correction that retraces the entire two-year uptrend. Either way, the odds are high that a deep correction is looming on the crude oil charts.

How do you trade Elliott Wave ending diagonal patterns?