4 Steps to Trade the Diagonal Pattern

Article Summary: Diagonal patterns are simple technical patterns that offer tight zones of entry and exit. Many times, the risk-to-reward ratio of the diagonal pattern will better than the 1-to-2 ratio that we suggest in our forex courses.

Diagonal patterns are one of my favorite patterns to trade because the method to trade them is fairly straightforward and you can identify clear risk and reward parameters. This piece will outline what a bullish diagonal looks like and how you set your entry and exit parameters for the potential trade.

The Anatomy of a Bullish Diagonal

The ideal diagonal would consist of five waves. Each wave of the three waves to the downside would be smaller than the previous alternating wave. The alternating waves of the 5-wave move are waves 1, 3, and 5.

This pattern tends to fool trend traders because it continues to produce lower highs and lower lows. Trend traders would see this as a bearish trend. However, there are a couple of clues that can tip us off that the trend is likely to correct or possibly reverse.

Another key point to consider is distinguishing the difference between an ending diagonal and a triangle. Triangles tend to move sideways as they consolidate a prior move. Diagonals tend to be directional. 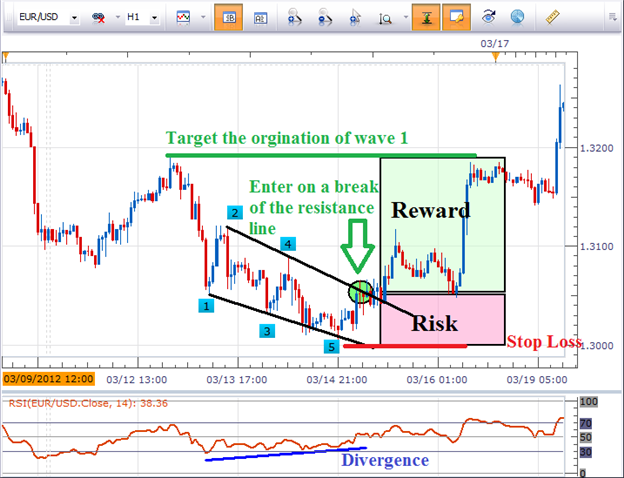 As wave 5 is taking shape or shortly after it is completed, we can begin setting up our trade.

Many times, because the pattern is losing momentum to the downside, when prices finally turn bullish, it can be a swift correction to the upside.

As you can see from the chart above, the risk-to-reward ratio on this trade would have been about 1-to-3, which is many times better than the 1-1 risk to reward ratios we discuss in our DailyFX traits of successful trader’s research.

Remember, this is simply a pattern to follow with buy and sell rules. Not all patterns and not all trades work out to be a winning trade. Therefore, it is important to be responsible to your account and use prudent risk management techniques such as trading in small sizes risking a small portion of your account. We suggest risking less than 5% of your account on ALL open trades.

Jeremy Wagner is a Certified Elliott Wave Analyst with a Master’s designation.