The current Elliott Wave for GBPUSD 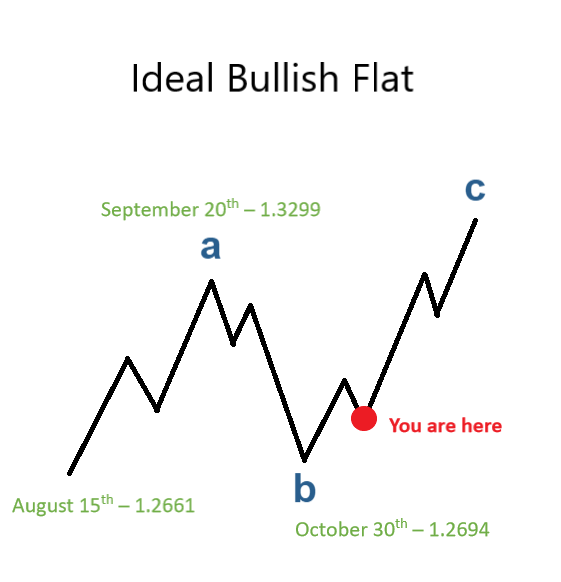 New to Elliott wave corrective patterns? On page 4 of our Elliott wave Advanced guide, we explain the most common flat patterns, where they occur and the sub-structure of each wave.

There are multiple wave counts that can lead to a sequence of three wave patterns. Due to the October 30 low appearing near the price low of August 15, the scales are tipped towards a larger flat or triangle pattern.

In both instances, when these patterns complete, it would lead to a larger decline in GBPUSD. However, in the shorter term, it does appear as though both of these interpretations are incomplete to the upside.

Using Elliott Wave Theory as our guide, GBPUSD may be in the midst of rallying in a ‘c’ wave higher. We believe this rally is part of a larger (B) wave. Therefore, the current Elliott wave for GBPUSD is wave ‘c’ of (B).

As mentioned above, there are other patterns formed by a sequence of multiple three-wave moves so as the structure develops we will look to eliminate some of them. 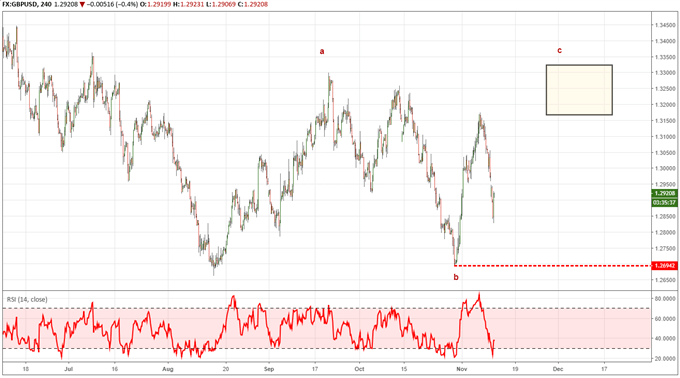 How do you know when a wave is finished?

According to Elliott Wave principle, each wave consists of a certain number of sub-waves depending upon the pattern. Once you can completely count all of the waves present, then the market is at risk of reversal. Naturally, we will not know for sure until some point after the reversal has taken place. However, we can anticipate price zones where a reversal is higher probability. As a trader, once the market reaches those price zones, I wait for a break of support or resistance trend lines to validate my view and enter the trade. Good trading is more than entry or exit signals, it also involves a risk management plan.

Entries are important, but did you know that how you manage your risk is just as crucial? On page 4 of our Building Confidence in Trading we list questions your trading plan should address and answer!