USD/JPY has been caught within an upward correction that we believe will resolve in a bearish turn soon. Bigger picture, we think USDJPY is in a downward corrective cycle since October 3 that may drive the pair towards much lower levels.

New to Elliott wave analysis? On page 4 of our Elliott wave beginners guide, we list out the rules and guidelines so you can properly label your own charts.

We are anticipating an a-b-c zigzag pattern lower that began October 3. This zigzag pattern would make up the ‘E’ leg of a larger triangle pattern that began from the 2015 high. It appears as though wave ((b)) of the zigzag is close to a termination point so that makes the current Elliott wave ((b)) of E. If this pattern is the correct one, then USDJPY will move lower in wave ((c)) of E that retests the 111 lows and possibly lower levels.

Why does Elliott Wave Theory identify a reversal near current levels?

Since the trend that began October 3 appears to be a bearish impulse wave into the October 15 low, it is highly probable that we will witness a subsequent three-wave bounce as a partial retracement. The Fibonacci 78.6% retracement is located near 113.92 and is considered the retracement of last resort. If USDJPY does not respect this level, then we will more highly consider other alternate Elliott wave patterns. 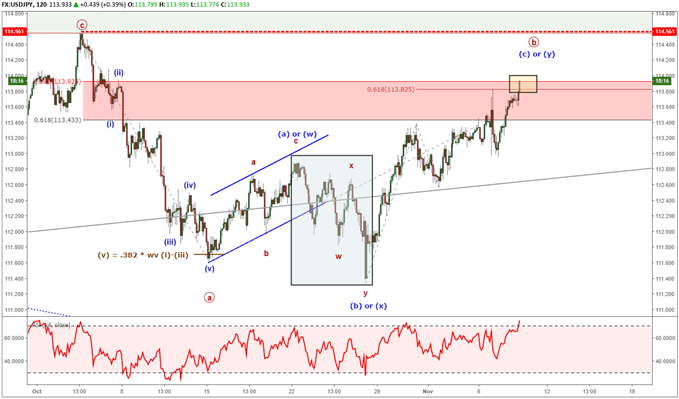 If this pattern does hold and a bearish reversal embarks soon, then we will anticipate wave ((c)) covering a distance of equal or Fibonacci proportions to the length of wave ((a)) in the zigzag.

If USDJPY does continue higher and break above 114.56, then this Elliott wave pattern is voided and we will consider other alternate counts.