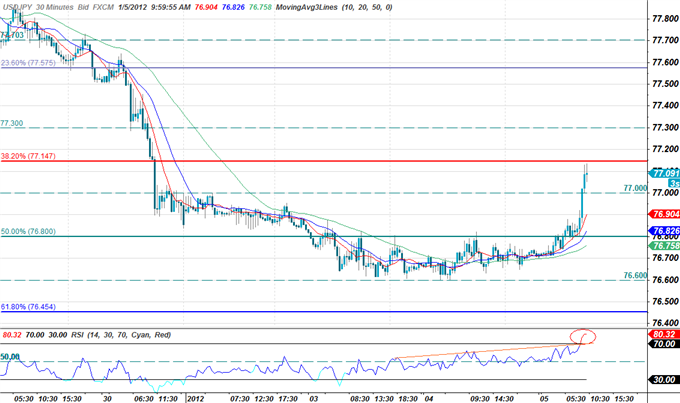 The Japanese yen it the top performer against a stronger dollar with the USD/JPY higher by 0.49% in early US trade. The greenback continued to rally and equities fell in overnight trade as the focus turned back to the European debt crisis. Although the bond auction in France saw good demand, yields inched higher with the spread between German and French debt climbing by eight basis points to 147 basis points, highlighting investor concerns regarding the possibility of a downgrade of French paper. Accordingly, we continue to see classic haven flows in play with the greenback advancing against all its major counterparts as traders sought refuge in the reserve currency.

The low yielding yen, often seen as a haven play in times of turmoil, advanced against all the majors save the dollar which continues to outpace the yen on risk-off days as intervention concerns temper yen advances. The USD/JPY broke above the 50% Fibonacci extension taken from the October 31st and November 28th highs at 76.80 before losing steam just ahead of the 38.2% extension at 77.14. Interim resistance holds here with a break eyeing subsequent ceilings at 77.30 and the 23.6% extension at 77.55. Support now rests at 76.80 backed by 76.60 and the 61.8% extension at 76.45. Look for the dollar to remain well supported here with the pair likely to keep a tight range throughout the session. 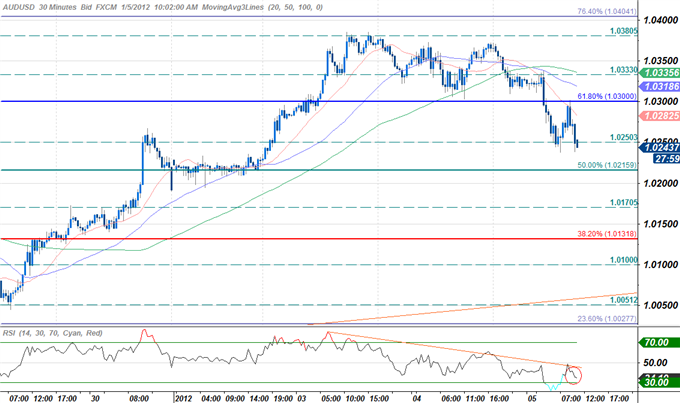 The Australian dollar is the weakest performing currency against the greenback with a loss of 1.12% an hour into North American trade. The high yielder has come under substantial pressure as traders look to minimize exposure to higher yielding, growth backed assets like the aussie. The scalp chart above shows the pair breaking below the 61.8% Fibonacci extension taken from the November 25th and December 15th troughs at the 1.03-handle before encountering soft support at 1.0250. Subsequent support targets are seen at the 50% extension at 1.0215, 1.0170 and the 38.2% extension at 1.0320. Resistance now stands at the 1.30-figure backed by 1.0330 and 1.0380. A breach above the 76.4% exte4nsion at the 1.04-handle negates our short-term bias and would represent a new 2012 high for the aussie. Having said that, look for the pair to remain under pressure so long as broader market sentiment remains weighted to the downside. Look for treasuries to lead the way with a sustained decline in yields further supporting our bias.