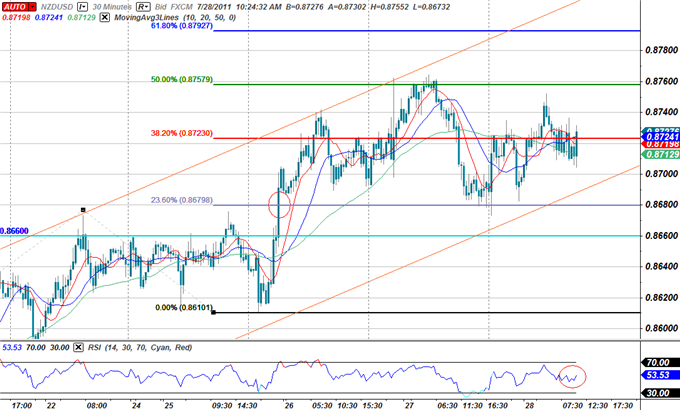 The kiwi remains the best performer an hour into North American trade, advancing more than 0.37% against the greenback. As expected the Reserve Bank of New Zealand left interest rates unchanged at 2.50%. However the accompanying remarks made by Governor Allan Bollard fueled speculation for future rate hikes after he cited that, “provided current global financial risks recede and the economy continues to recover, the bank sees little need for the March ‘insurance’ cut to remain in place much longer.” However the kiwi’s advance was capped after Bollard continued to state that, “the current high value of the New Zealand dollar is acting as a drag on the economy.” He went on to cite that, “if this persists, it is likely to reduce the need for further cash rate increases in the short-term.” Traders took the statement as a signal that the central bank may hold off on hikes until the kiwi’s strength starts to taper off, limiting the currencies advance immediately after the announcement. The NZD/USD remains within a well-defined ascending channel with the pair continuing to straddle the 38.2% short-term Fibonacci extension taken from the July 15th and 25th troughs at 0.8723. Future kiwi price action will hinge on risk appetite, with topside targets eyed at the 50% Fibonacci extension at 0.8760 and the 61.8% extension at 0.8790. Interim support now rests at the 23.6% extension at 0.8680, with subsequent floors seen at 0.8660 and 0.8620. 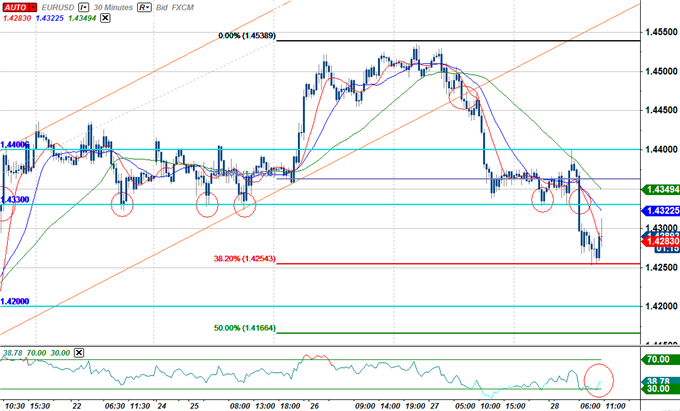 The euro was the worst performer for the second consecutive day, falling more than 0.42% against a modestly stronger dollar. Ongoing concerns regarding the crisis in Europe continue to weigh on the euro after rating agency Standard and Poor’s downgraded Greek debt by 2 notches, citing the newly agreed stability plan announced last week in Brussels may not be enough to prevent the further contagion to the periphery nations. The single currency is likely to remain on the defensive after breaking below the key 1.4330 level in pre-market trade noting interim support at the 38.2% Fibonacci extension taken from the July 3rd and 26th peaks at 1.4250. A break here eyes downside targets at the 1.42-figure and the 50% extension at 1.4160. Topside resistance now holds at 1.4330, with a breach targeting subsequent ceilings at the 1.44-handle, 1.4460, and 1.4520. Overnight traders will be eyeing retail sales data out of Germany and the Eurozone CPI estimate for July.