The carry trade continued to unwind on Monday as the Australian and New Zealand Dollars continued to shed ground against the safe havens, the Japanese Yen and the US Dollar. Pressure has been on high beta currencies and risk-correlated assets as Asian investors react to Friday’s disappointing US Nonfarm Payrolls report for June, as well as some discouraging Chinese data in the overnight that suggests deflation may be becoming a concern for policymakers in one of the world’s most important economies.

With the issues raised thus far on Monday firmly rooted in Asia, the Euro has had a chance to consolidate slightly to the downside against the Japanese Yen and the US Dollar. As the technical notes show below, it’s evident that the EURUSD is deeply oversold, with these extreme technical conditions saturating even the 8-hour charts. It’s of my opinion that, without a significant catalyst, the EURUSD is primed to consolidate if not rebound in the coming periods before the next leg of the sell-off hits.

The economic docket is rather dry in the coming hours, with perhaps the most important event being the US Consumer Credit report for May. Beyond today’s docket, we continue to look for headlines out of Europe as the ECOFIN Council meets to discuss further measures to stem the crisis. 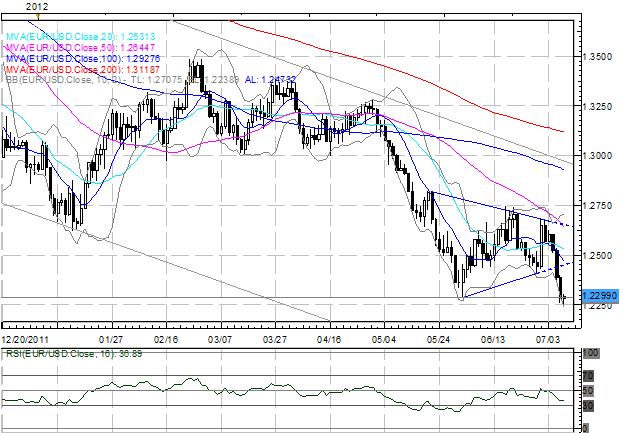 EURUSD: The Symmetrical Triangle on the daily chart has broken to the downside, and we have traded into our first level of support at 1.2285/90. The new yearly lows set on Friday and today at 1.2255/90 suggest further losses ahead; though with the pair significantly oversold even up to the 8-hour chart, it’s likely that, without a catalyst, the EURUSD consolidates or rallies in the periods ahead. Given the measured move and Fibonacci extensions, we are looking for a move towards 1.1695-1.1875 over the next eight-weeks. Resistance now comes in at 1.2440/80, former support on the Symmetrical Triangle. 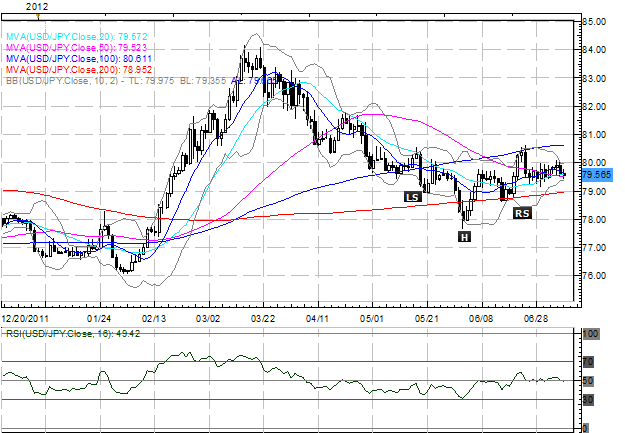 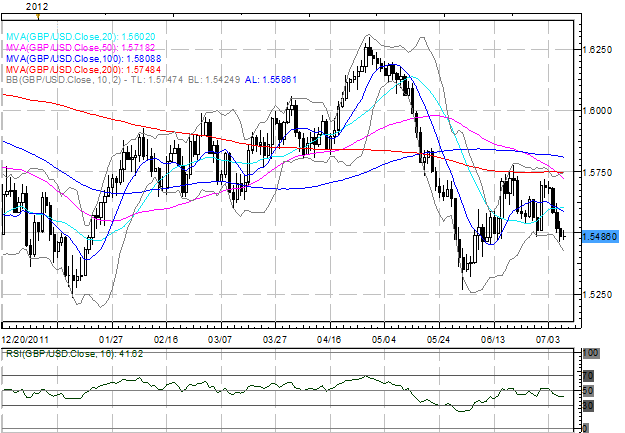 GBPUSD: Fresh news lows on Friday at 1.5460 have yielded little follow-through thus far on Monday, and it appears that we have the early stages of a Doji daily candle (also an Inside Day) at work on the daily chart. This would signal a near-term reversal and clear the way for some GBPUSD strength over the next few sessions. Resistance comes in at 1.5600/05 (20-DMA) then the monthly high at 1.5720/25. Near-term support comes in at 1.5460 then 1.5425 (Bollinger Band). 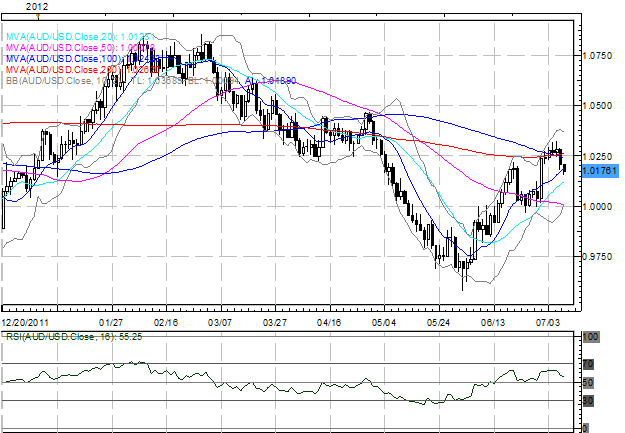