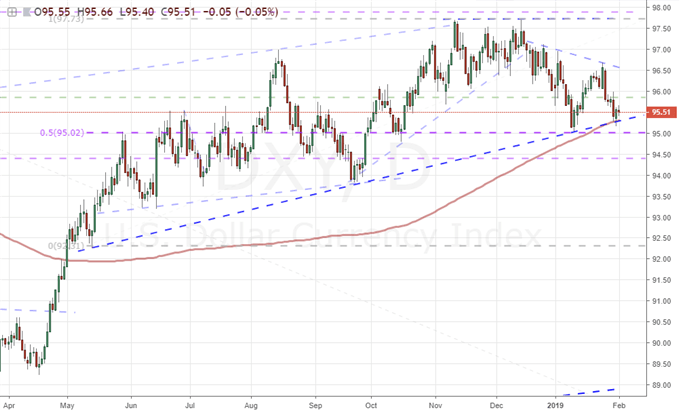 Dollar Avoids Critical Breakdown, But for How Long?

As far as technical significance goes, the support that the DXY Dollar Index held this past week carries significant weight. While there are some oscillators and a few advanced technical measures that reinforce the influence of 94.20-35, the qualities that most stand out to me are the simple chart patterns that are in turn the most overt. I am a firm believer that there is more ‘self-fulfilling prophecy’ in price development around traditional techniques than there is a ‘secret code in the masses’ fluctuating emotions’. That said, the combination of trendline support starting with the lows in May (with tests in September and January) and the 200-day moving average is a confluence of high-profile measures that will raise its clout. So long as there isn’t a prevailing speculative/fundamental wind to drive the bears to power, this support could hold fairly well. Whether we put in for a range reversal or attempt a break next week, there needs to be an increase in tempo if the move is to provide the kind of opportunities that most traders look for in follow through. Though you may consider yourself a devoted disciple of technicals, don’t underestimate the contribution that headline-worthy event risk (data, speeches, etc) can generate for short-term volatility charge or systemic themes can do for returning trend to markets cast adrift.

The hurdle to consider for the Dollar moving forward is not whether or not it can overtake near-term support or resistance. It is instead a question of what will promote follow through on the direction the market takes. We can generally feel the sense of restriction in the daily charts from the Dollar indexes and pairs like EURUSD. However, it is unmistakable when we look at the higher time frame charts like the one below. The DXY has coasted in a general bullish trend over the past nine months, but its advance has come with very little consistency. To put a statistical evaluation to the conditions with a reference to history, the 4-week average true range (equivalent to one trading month) is the lowest since late April – just before the Greenback started its near 6 percent climb in the span of a month. At the same time, the range that the currency has been restricted to over the past 12 week (equivalent of three months) is nearly the most restrictive since the Summer of 2014. It is easier to hold range when volatility is low, but activity levels can change suddenly. 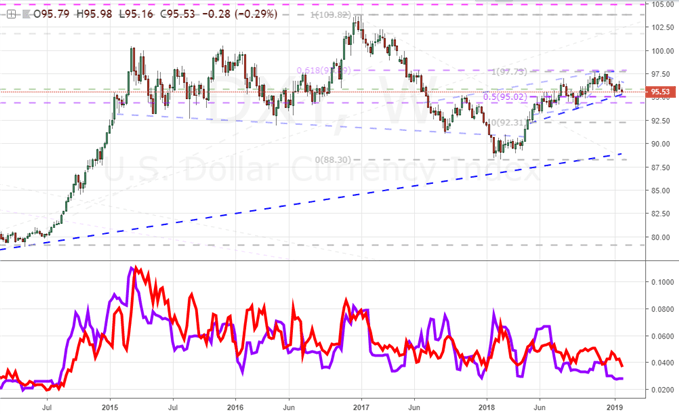 Collective speculative sentiment doesn’t draw too many direct corollaries to physics but the Newton’s first law of motion seems to carry over. A body of traders at rest will remain at rest unless an outside force provokes it. A well-established range in a quiet market environment is likely to hold up unless there is an overwhelming force to alter course and pace. While it is certainly possible that a sudden groundswell of speculative appetite can earn a technical break for which traders rush in behind to ride the sudden momentum, it can take more than just a chart-based milestone to overcome the inertia. Event risk over the coming week has a few highlights, but few FOMC decision or NFP-level updates. The Dollar doesn’t always determine its own path however. The currency can readily shift into a role of absolute safe haven should the markets suddenly collapse. A measured fear paired with a steady decline in Fed rate forecasts meanwhile could turn the Dollar into an expressly high-risk currency in that same scenario. There is also the US currency’s role as the primary counterpart to the rest of the FX market. In this role, it is worth always keeping tabs on EURUSD. Its picture looks like the mirror of the DXY (the pair accounts for approximately two-thirds of its weighting) with 1.1500 as resistance (Dollar support). Also of interest is the implied volatility behind this pair. The CBOE’s activity index for the pair dropped sharply over the past few weeks to hit levels of anticipated quiet not seen since December 2017 – a period that preceded a general market activity resurgence. 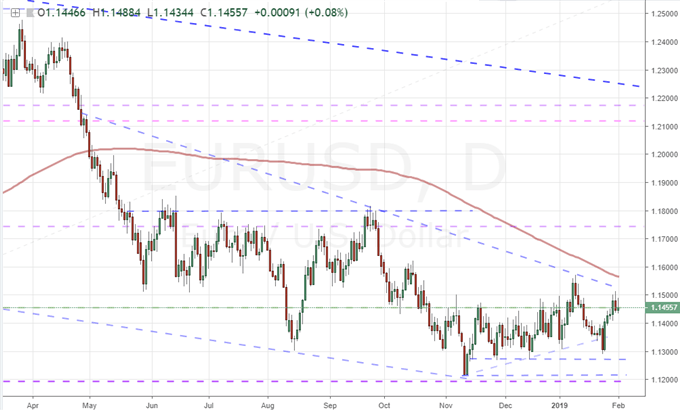 In the same market-relative-to-Dollar vein, it is worth considering the FX market’s general strength or weakness considering risk trends are shifting, monetary policy is under pressure and fears over financial market stability should one of the many threats to the system gain traction. More often, we consider the Dollar relative to other currencies to establish trades, but it is also worth looking at the general appetite or distaste for assets based on the assurance of governments (fiat) with this environment. For this assessment of relative value, we have gold. The precious metal has proven itself a haven of antiquity that can readily revive its draw should mass currency devaluation prevail (as it did in the rise of stimulus). Gold has recovered considerable lost ground versus the US Dollar since its low in August (nearly 14 percent). That said, it is the commodity’s performance against all major currencies over these past months – pushing to highest not seen since September 2017 – that raises more significant questions. 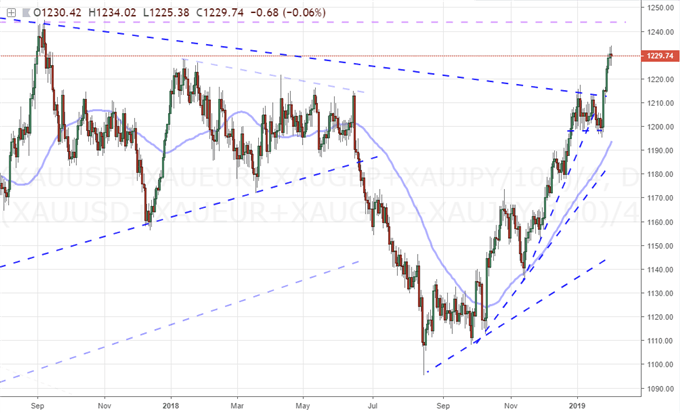 Though the CFTC is due to restart its Commitment of Traders updates following the end of the US government shutdown, there were still no updates from the past six weeks of fundamental positioning among speculators at the time of this writing. So, we will refer to retail traders rather than large futures traders. As you can see below, the bulls and bears are essentially balanced in their view for EURUSD according to broker IG’s client figures. That indecision is fair reflection in the state of the pair. Oscillating between 1.1500 and 1.1275 is a modest range, but a range nonetheless. Notably, where the bulls were clearly convinced of a rebound from the last test of 1.1275 last week, there is not the same degree of speculative effort from bears now that we have returned to the top end of the range. It seems in this short-term acquiesce to the range, there is an underlying sense that eventual resolution will be a break above 1.1500. The question on everyone’s mind though is: when? 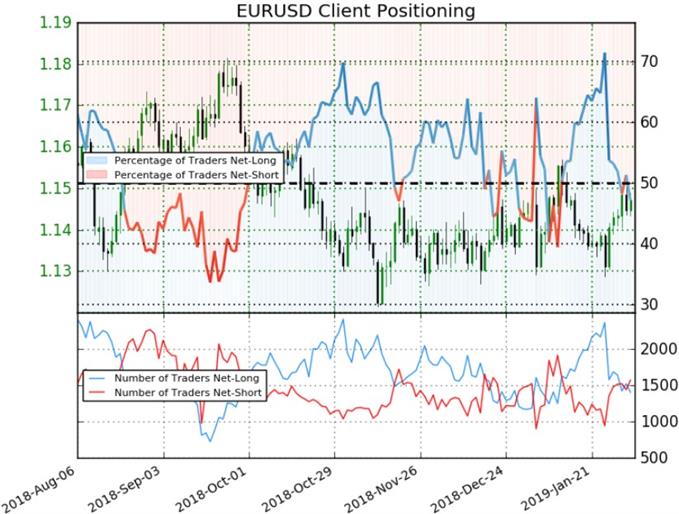