US Dollar May Rise on Haven Demand as Market Sentiment Sours 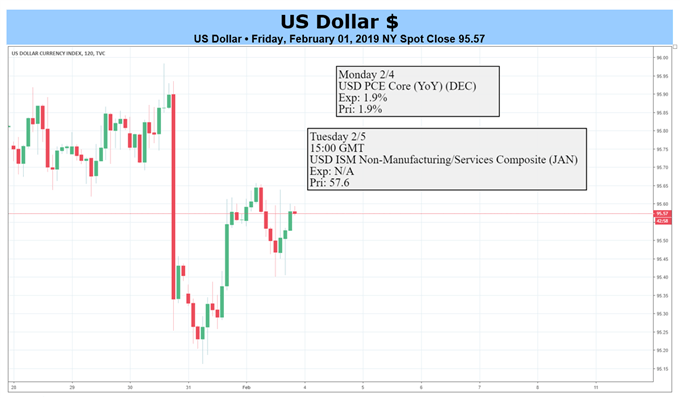 A soggy US Dollar response to January’s unexpectedly strong employment data speaks volumes about the underlying drivers of the currency’s performance. Payrolls grew at the fastest pace in 11 months while an uptick in the jobless rate looks to have occurred for all the right reasons considering a parallel rise in labor-force participation. Wage inflation moderated but held relatively strong at 3.2 percent on-year.

Treasury bond yields rallied as the impressive data set nudged up the priced-in 2019 monetary policy outlook implied in Fed Funds futures. Risk appetite firmed as well at first, but the bellwether S&P 500 quickly lost momentum and turned downward. The Greenback initially rose with yields, pulled back as stocks hit an intraday high, then rallied back to recover lost ground as sentiment soured.

This seesaw price action speaks to the benchmark currency’s conflicting roles as a yield-seeking and haven asset. On one hand, it continues to command the highest baseline rate of return in the G10 FX space, which ought to align it with pro-risk assets. On the other, its unrivaled liquidity makes it a sought-after commodity when capital pours out of other corners of the market amid broad-based liquidation.

It is likewise telling that investors’ mood soured not only despite evidence of a stronger US economy than had been expected, but arguably because of it. Traders cheered last week’s dovish turn in Fed rhetoric despite its origins in policymakers’ deepening concerns about the global economic outlook. Data flow carrying potential to revive a more hawkish disposition turned this dynamic on its head.

This seems to speak to a broad unease across financial markets. What might have been expected to offer encouragement in the durability of global growth is being treated as a threat in that it might discourage policy support. That seems to imply the predominance of a dour world view among market participants, with any near-term signs of strength dismissed in favor of a focus on darkening prospects farther ahead.

On balance, this suggests the path of least resistance favors risk aversion. That bodes well for the Dollar, which seems to be showing an increasingly consistent ability to capitalize when traders turn defensive. The week ahead offers plenty of potential triggers for a market rout. If that materializes, a rise in liquidity demand will probably send USD upward.

Chinese PMI data may point to slowdown in the world’s second-largest economy even as trade talks with the US remain inconclusive. Policy statements from the RBA and the Bank of England may reiterate worries about slowing global growth and the threat of a “no-deal” Brexit. Upbeat US ISM data may have much the same effect as January’s the jobs report.