Euro continues to play catch up with GBP surge as demand for the currency remains relatively firm. However, with little on the calendar throughout the session and with investors turning their focus towards tomorrow’s historic Brexit vote, topside resistance at 1.1150-60 may cap further upside as positions are squared ahead of the weekend.

Sterling holds onto its recent gains with the currency hovering around the 1.29 handle ahead of Saturday’s vote. Boris Johnson needs to secure 320 vote majority to get his deal through parliament and as it stands, it looks to be somewhat neck and neck. Whatever the outcome, GBP/USD is expected to see a sizeable reaction at Sunday’s open with option markets implying a 1.7% move.

US Dollar is on course for its 3rd consecutive weekly dropsignalling a more consistent deterioration in USD sentiment. Fed speakers will provide their final remarks before the blackout period ahead of the October rate decision. As it stands, in light of the weakness in domestic data, the Fed is seen delivering another rate cut.

New Zealand Dollar trades at a 1-month high amid the improved risk tone. As we had highlighted in the CFTC report in recent weeks, given that net shorts in the Kiwi had been at extreme levels, risks were asymmetrically tilted to the upside, particularly with money markets fully priced in for another RBNZ rate cut. That said, the Q3 CPI report, which rose faster than the central banks assumptions has seen 3bps worth of easing priced out, thus keeping the NZD firm. 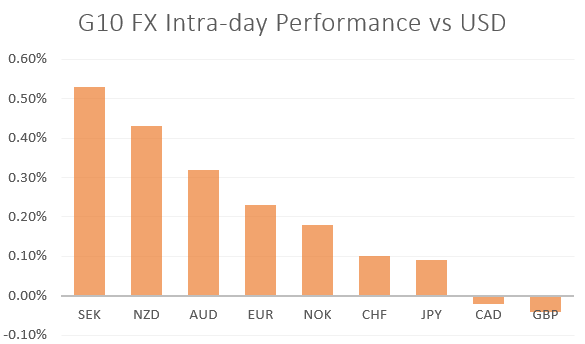