GBP/USD to be Most Volatile Currency Next Week: Eyes on Historic Weekend Brexit Vote 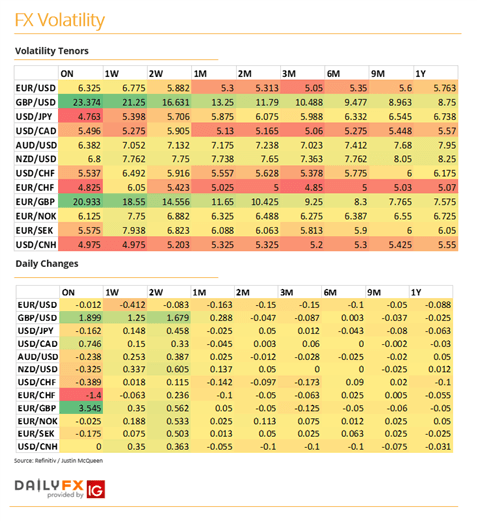 GBP/USD Overnight ATM break-even straddles = 218pips/23.374vols(meaning that for option traders to realise gains, the spot price must see a move greater than 218pips).

Politics continues to dictate volatility in the Pound with option premiums at the highest since the 2016 EU referendum. Over the weekend, the key focus will be on the historic vote on UK PM Johnson’s Brexit deal, which will see MPs sit in parliament on Saturday for the first time in 37 years. The question market participants are asking themselves is whether Boris Johnson has enough support to seal a majority and ratify the deal, which looks to be somewhat neck and neck with Sky News projecting that Boris Johnson will fall short by 4-votes (320 needed for majority). Expectations that Boris Johnson can get a deal passed has been slightly tempered by the DUP’s rhetoric, in which they stated that as it stands, they will vote against the deal. That said, there is still another time over the next 24 hours to potentially conjure up support. If indeed PM Johnson were able to reach an agreement GBP/USD could gap above 1.30. Of note, bookmakers highlight that MPs accepting the deal is the most likely outcome. 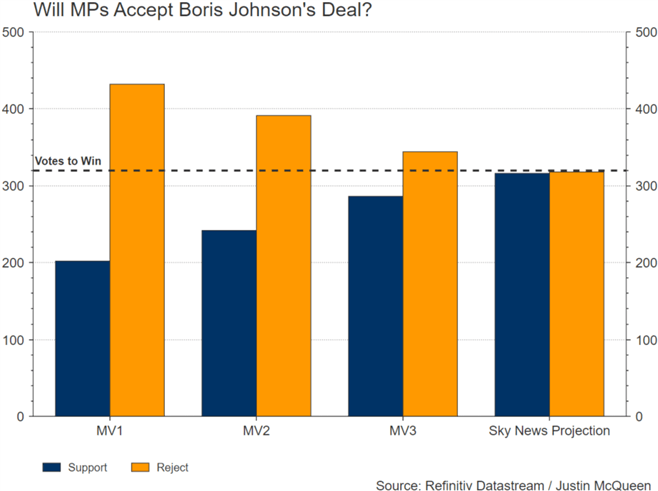 What Happens if Deal Fails?

In the event that Boris Johnson fails to get his deal through parliament, the key question will be what happens next. The most likely scenario we see would be a general election around Nov/Dec following the PM’s request for an extension to Article 50. Those the renewed political uncertainty would likely see the Pound once again on the backfoot with GBP/USD heading below 1.2500.

0930BST – Parliament to sit, in which Boris Johnson will make a statement to lawmakers, which will be followed by a 90-minute debate.