1. Chinese stocks take a heavy hit: There was no devaluation of the Yuan last night, nor were there any announcements from Chinese regulators – and Chinese stocks saw nasty price action that took bourses down to the tune of -6.15% on the Shanghai Composite and the Shenzhen Composite by -6.58%. This came after the third consecutive day of a marginally stronger fix on the Yuan, and the size of the sell-off has created concern over a ‘hard landing’ in China. Last night’s selling wasn’t relegated to China, as emerging market currencies around-the-world also sank along with an additional plunge in commodity prices. European equities have followed Asian stocks lower, as the UK100, GER30 (DAX), and FRA40 (CAC 40) are all pricing lower thus far on the day. The ‘wall of worry’ is continuing to grow.

2. Pound Pops on Surprise Pickup in Inflation: The UK is one of the few economies in the world outside of the United States that may actually be looking at a rate hike in the not-too-distant future. At the last BoE meeting, the MPC voted to keep rates on hold as pressures from Greece and China brought uncertainty into the environment. The MPC had specifically cited a lack of inflation as a reason for standing pat.

But this morning, the UK saw in upside surprise in inflation by printing at .1% v/s an expectation of zero: Core CPI jumped to its highest level in five months, to 1.2% from .8% and higher than the .9% expectation. These numbers are still far below the Bank of England’s 2% inflation target, but do prove encouraging as this is one of the few economies to actually show strength.

This surprise inflation read has popped the Sterling higher against all major currencies, and this is another reason to trade in the direction of the trend, and look to stay positioned in the direction of the general bias in the market. Last week, GBPUSD broke above a descending trend-line and set higher-lows in the process. On the print of inflation data last night, the Cable popped ~120 pips, giving a beautiful support hit right off of the projection of this descending trend line. 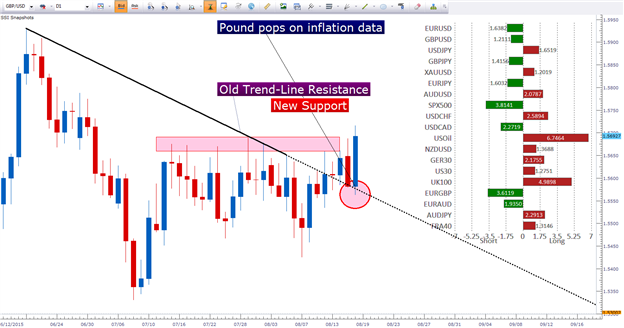 3. The Dollar Dilemma: Despite the numerous fears in the global economy right now, spearheaded by major sell-offs in Chinese stocks and commodities, the US Dollar has continued to trade within it’s relatively well-defined range. Yesterday gave a strong bounce off of the lower support zone, but indecision thus far on the day has left us in the middle of ‘no-man’s land.’ But with US CPI data tomorrow, followed by Fed minutes, this stifled greenback may have the opportunity to run.

Continue to look for ways to pick on USD while it trades in this range: As in, look to sell the dollar against currencies that have shown strength (like GBP), and look to sell the dollar against currencies that have shown weakness (like Commodity currencies). Take a patient approach, and wait for the dollar to hit resistance before selling, or support before buying. And if looking to take a hybrid type of approach, look cancel out that USD risk by trading a cross-pair with each of those themes. GBPCAD is a great example, and the surprise UK inflation data last night helped the trade even more. But with something like this, you can theoretically trade the dollar without having to be exposed to it.