1. So, China was active again: In their commitment to market reform, the People’s Bank of China set the reference rate for the Yuan last night based on the trading activity of the previous session, within +/- 2% band. They started off the session with the reference rate 1.6% lower.

Throughout the session, a deluge of bad data came through: Chinese industrial output disappointed with a 6% print, missing expectations. Retail sales grew at their slowest pace since 2000, and fixed-asset investment also missed expectations. This combination of factors makes that 7% growth target look even more daunting and, frankly, unrealistic in this economic climate.

Investors responded by jumping on the short Yuan trade. This has led to the biggest two-day sell-off in Asian currencies since 1997, which was a big event in-and-of-itself. Eventually, the Yuan hit its maximum threshold of 2% lost, so the PBOC intervened in the market towards the end of the session to strengthen then Yuan. 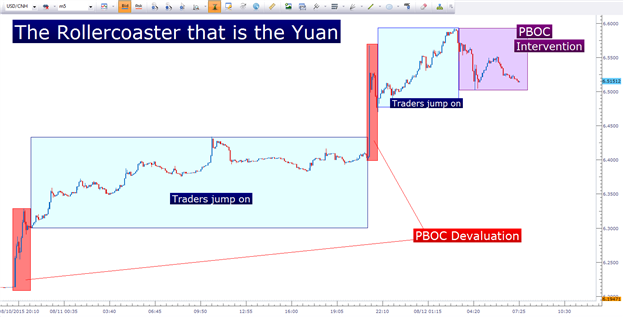 2. The ‘Wall of Worry’ is growing: Moves from the PBOC have hardly been confidence-inspiring, and if anything have set off a raft of growth concerns around-the-world. US Stocks got hammered yesterday, and the rout continued in the overnight session as Asian indices traded lower, leading into weakness in European bourses.

Also noteworthy – expectations for that September rate hike in the US are moving lower as these multiple pressure points in the global economy continue to trigger concern, making it increasingly unlikely that we’ll see something from the Fed anytime soon.

Accordingly, we’ve seen the US Dollar move lower into the support zone of the range we had identified earlier in the month. Resistance was triggered yesterday at the 12,050 level, and now we’re approaching the 11,975 support level.

Look for support to come in on the US Dollar north of the 11,965 support level. Look for a wick on the hourly or 4-hour charts before triggering the position; and look to play that theme in those pairs that have been so accommodative for USD strength, namely the commodity currencies like USDCAD (watch 1.3000), AUDUSD (.7350-.7400), and NZDUSD (.6625).

We have Advance Retail Sales out of the United States tomorrow, and this could certainly provide the ammunition to get us back into this zone of resistance. 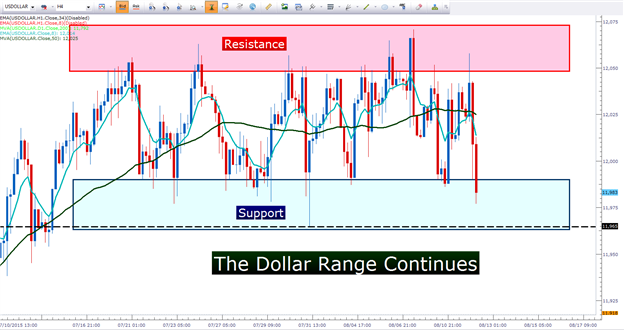 3. What’s next for the Yen? Nearly three years into ‘Abe-nomics’ and we’re still waiting for signs of growth or inflation in the Japanese economy. Last night, we saw another disappointing Producer Price Index print posting a 3% contraction from the year prior, missing analyst expectations and posting the biggest decline since 2009.

With China getting significantly more active in the currency market, this could serve to add even more pressure on the Bank of Japan to do even more in effort of stimulating the economy. The Bank of Japan minutes last night made no mention of additional interventions or QE discussions, and the Yen strengthened as investor’s hopes were diminished. This could put the Yen in an awkward position that may see safe-haven flows move into the currency should this global ‘wall-of-worry’ continue to grow.

The USDJPY Daily chart is currently showing a Bearish Engulfing pattern, and while we have ~9 hours until the close of business to confirm this formation – it can be an excellent indication of topping if it does, in fact, close in this manner. 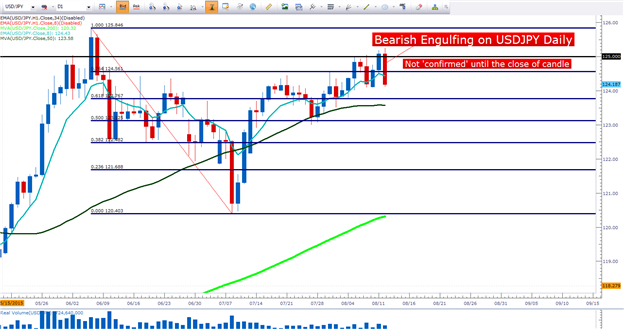 Written by James Stanley of DailyFX; you can join his distribution list with this link, and you can converse with him over Twitter @ JStanleyFX.