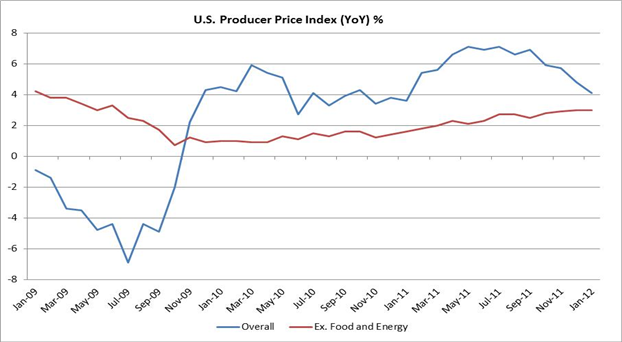 A report released today by the U.S. Bureau of Labor Statistics revealed that producer prices rose less than forecast in January as food and energy costs dropped, signaling that inflation pressures may remain subdued. The seasonally adjusted Producer Price Index for finished goods advanced by 0.1 percent in January over the prior month, following a 0.1 percent drop in December and 0.3 percent gain in November. The median forecast according to a Bloomberg News survey had predicted a rise of 0.4 percent. Meanwhile, the year over year change in PPI rose by 4.1 percent, as had been widely forecasted.

The less volatile core rate, which excludes food and energy, rose by 0.4 percent on a monthly basis and 3.0 percent on a yearly basis, more than projected forecasts of 0.2 percent and 2.7 percent respectively.

At the same time, the U.S. Consensus Bureau and the Department of Housing and Urban Development jointly reported that the number of privately-owned building permits and housing starts rose in January, reversing the slowdown in December and adding to signs that the U.S. residential housing market may be stabilizing.

The number of building permits issued in January rose to 676,000, up by 0.7 percent from the prior month after declining by 1.3 percent in December. According to a Bloomberg News survey, economists had predicted a 1.3 percent rise and approval of 680,000 new building permits, which is often used as a gauge of new constructions and developments in the housing market.

Meanwhile, there were 699,000 new housing starts in January, a 1.5 percent increase on a monthly basis. December figures had been revised from 657,000 to 689,000. Median estimates from economists in a Bloomberg News survey had predicted a 2.7 percent rise to 675,000 new home starts over the prior month. The rise was spurred by an 8.5 percent gain in multi-family starts. 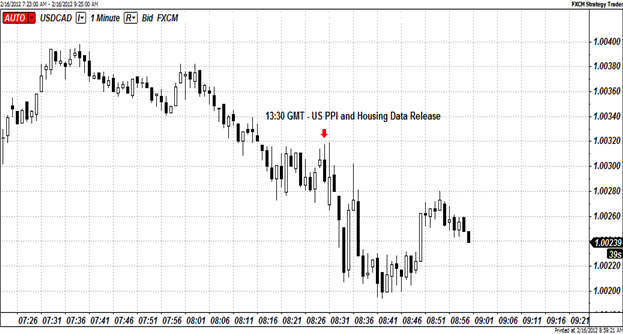 Immediately following the data release, the greenback weakened against most of the other major currencies, dropping 12 pips against the Canadian dollar in the first few minutes. After making a slight correction, the U.S. dollar continued its downward slide, paring gains seen earlier in the day despite the strong housing data showing a stabilizing housing market and subdued inflationary pressure. At the time that this report was written, the U.S. dollar was trading at 1.0015 Canadian dollars.