This past week’s price action from indices to FX to commodities was a notable transition from the extreme volatility earlier in the month. Can markets simply revert to the extreme complacency cultivated over the past years or has the recent jolt of volatility permanently changed the market’s relationship to burgeoning and mature fundamental risks that continue to gain traction in the global financial system?

We will be spoiled for event risk for the Dollar over the coming week. Yet, too many competing catalysts and the influence of market-wide volatility may create as much indecision as conviction.

Has the Euro gotten too big for its britches? Economic data momentum has plummeted sharply in recent weeks, making the release of the February CPI report a significant test for the single currency this week.

Sterling remains close to GBPUSD 1.4000, and continues to be stuck in a narrow range against the Euro, despite a weak set of UK hard data releases, as the UK government stands firm in Brexit talks.

Headline inflation continues to rise in Japan, coming in at a fresh 34-month high in January. With Yen-strength becoming a more prominent theme, inflation gains can remain as a key driver in the near-term.

The Australian Dollar faces plenty of likely points of economic interest this week, but few of them are Australian. Chinese and US numbers will hold the trading key.

China will host the annual NPC and CPPCC meetings in a week; the growth target as well as other economic goals to be released by the Premier are in the spotlight.

After an inventory report delayed by the US holiday showed surging US exports, shale oil producers are looking smarter than ever while OPEC-member contemplates long-term relationship with Russia.

In the week ahead, global stock markets will try to work their way higher, but still have obstacles to overcome; a few notable events on the calendar to keep an eye on.

Gold prices are on pace to mark the largest weekly decline this year amid a short-term recovery in the USD. Here are the updated targets & invalidation levels that matter. 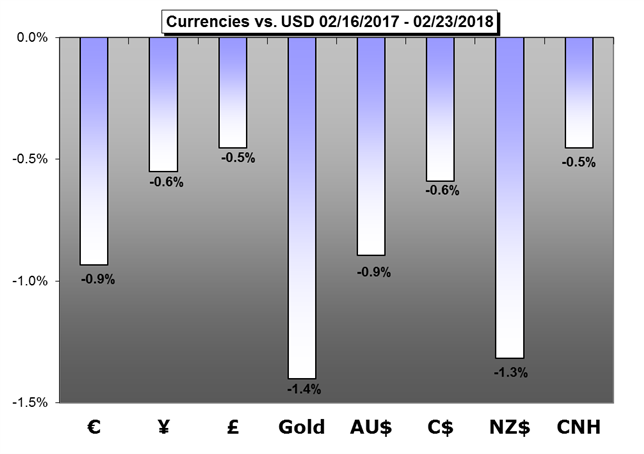