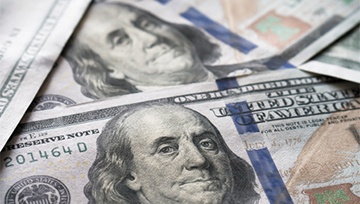 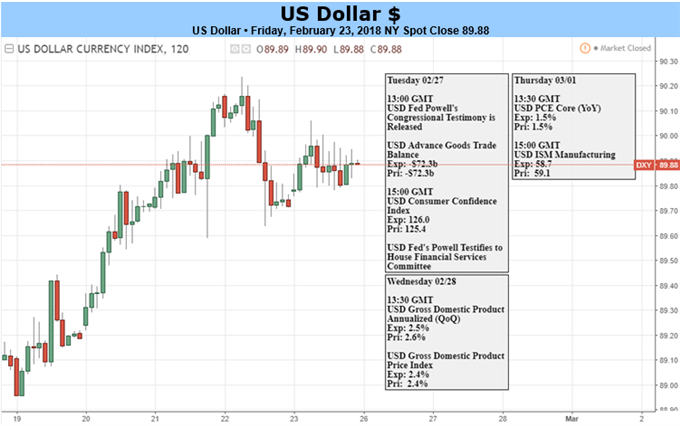 The Dollar made a half-hearted attempt at a rally this past week, but the four-day charge wouldn’t even bring us to the top of the past month’s range much less break it. Reference to a higher time frame chart keeps us firmly in a dominant bear trend, but the lack of progress for the slide suggests fundamentals are going to play a more important role going forward. While the fundamental back drop from traditional monetary to novel protectionism themes is not particularly the fodder of a record breaking rally, nor is it the catastrophic bearish scenario that the Greenback has seemed to personify over the past year. In other words, it is easier to generate fundamental enthusiasm than it is lament.

Looking to the economic docket and off the cleanly defined calendar, there are a few different themes that will be touched upon; but the most overt mix will test the market’s conviction in monetary policy. For data, this is actually one of instances where the first Friday of the month will not offer up NFPs. Yet, we have something more important to the rate decision puzzle: inflation. The Fed’s favorite PCE deflator is due Thursday. Less distinct in its impact on rate speculation and the Dollar’s bearings is new Fed Chair Jerome Powell’s testimony before Congress to read from a script and then answer questions relating to the semi-annual monetary policy report issued this past Friday. As we register these two fundamental points and other lower tier influences, it will be important to remember that there has been a remarkable divergence between the Dollar and implied yield from Fed Fund futures and short-term (2-year) Treasuries over the past 6-8 months. Will this theme come back into vogue? It will likely require a more dramatic divergence between the US central bank and its peers.

A different sort of fundamental theme is gaining traction quickly for the US – and world: protectionism. It is also referred to by its more economic term of isolationism and dramatic name of ‘currency’ or ‘trade war’. The United States has moved to cancel or renegotiate a number of long-standing trade deals with partners since the Trump Administration came into power. When the executive branch brought an agenda of ‘America First’ to Davos, the effort seemed to hit a new stride. That would have been a mere abstract term more suited to curry favor with constituents than upset trade partners had it not been for the clear warning issued to investigations into trade inequities. Recently the Commerce Department released findings on key trade with steel and aluminum leading to recommendations of heavy tariffs on all or targeted tax on particularly distinct offenders. Into the close Friday, it was reported that President favored the most aggressive of the recommendations – a 24 percent tariff on all imported steel. Trade wars rally stop at one unanswered volley. The same is true of currency wars – more charitably referred to as competitive monetary policy.

One of the strongest forces that has worked against the Dollar is the strength of its primary counterparts over the past year. The Yen has gained some modest traction as sentiment has eroded in carry first, but we know where the preference lies should isolated deleveraging turn into general panic. The Pound gained ground as the worst fears of Brexit were eventually seen as over-indulgent panic. That said, at 1.4000, the Cable looks dubiously optimistic against the language coming out of the negotiations and even the UK commons. The greatest indirect lever to the Dollar however is through the Euro. The second most liquid currency gained a substantial amount of its favor through hawkish expectations of the eventual reversal in monetary policy course for the ECB. The central bank has attempted to talk down this outlook in a thinly veiled effort to cool the Euro. They took it a step further in the minutes of their last meeting this past week though when it was suggested a number of their rank believed the US may be pursuing policies directly or indirectly aimed at devaluating the Dollar. This seems like a warning that the monetary authority is readying to retaliate. If you think that unlikely, just look back to April, May of 2014. By hook or by crook it seems market forces are looking to alter the course of this benchmark pricing instrument.