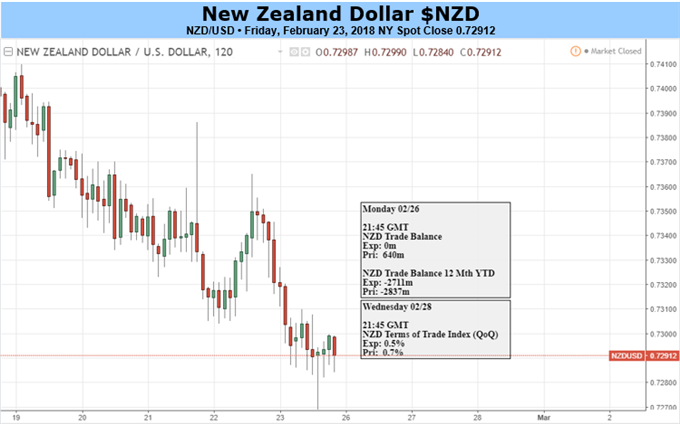 The New Zealand Dollar focused on external news this past week, spending most of its time declining against the US Dollar. This was likely due to a lack of key economic event risks from its home country. At most, you had better-than-expected fourth quarter retail sales. But the data failed to spark a meaningful positive reaction in the currency. However, there was an important development at the central bank.

RBNZ’s incoming governor Adrian Orr said that he expects to sign the proposals to broaden the central bank’s mandate shortly before taking office on March 27th. These include making the Reserve Bank of New Zealand target full employment in addition to stabilizing prices, similar to the Fed’s dual mandate. Mr. Orr declined to comment on current monetary policy as he wasn’t involved “at this point”.

On the external front, Wednesday’s hawkish FOMC minutes increased Fed rate hike expectations. As mentioned before, this saps the appeal of the New Zealand Dollar as the markets face the reality that its US counterpart is inching closer to having the highest yield in the majors’ spectrum. Firming US lending rate fears also took its toll on Wall Street as the S&P 500 fell, hurting the sentiment-linked Kiwi Dollar further.

Looking ahead, we will probably have more of the same fundamental themes play out next week. Mainly, attention is likely to be on external data and stock markets. At home, New Zealand’s trade balance figures will be released on Monday, followed by business and then consumer confidence on the following days.

The former may offer a volatile NZ Dollar response in the short term due to the country’s reliance on trading. However, a lasting response that plays out in the aftermath might be absent. This may be due to the incoming RBNZ regime change which might delay near-term monetary policy action as Adrian Orr and others get settled into a new mandate. All the while, the central bank seems to be in no rush to adjust policy as is.

This sets the stage for the sentiment-linked New Zealand Dollar to focus on what’s happening in the global markets. In particular, the US. Next week, the Fed’s preferred gauge of inflation (Core PCE) will cross the wires. An upside surprise here could further bolster Fed rate hike expectations, sapping the appeal of Kiwi Dollar. Meanwhile, a testimony from Jerome Powell could do the same if his tone echoes the hawkish FOMC minutes.

With that in mind, the New Zealand Dollar will probably be left vulnerable to external factors and risk trends next week. Even though Fed policymakers might echo last week’s hawkish minutes, nasty surprises in key local economic data are always a risk. The outlook will have to be neutral.