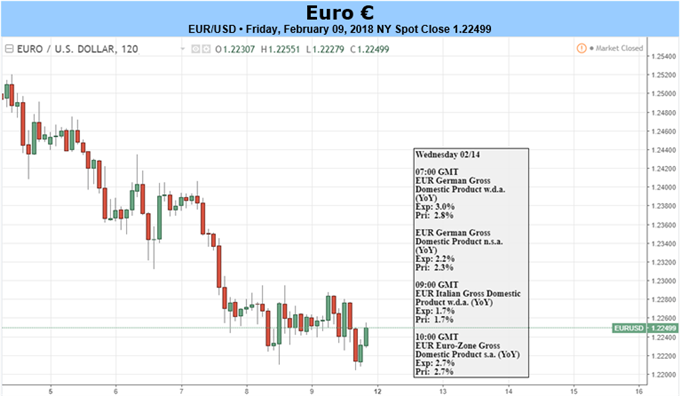 If you’re looking for longer-term analysis on the Euro, click here for our Trading Forecasts.

The Euro has been a freight train for much of the time since last year’s open, constantly chugging-higher even in light of bearish drivers. Since setting a 14-year low on just the second trading day of last year, bulls took over and have largely been in-control ever since. This happened while the European Central Bank was seemingly talking the currency-lower throughout 2017, continually saying that they weren’t quite ready to begin plotting for the end of QE. Nevertheless, markets continued to anticipate some inevitable move off of uber-loose monetary policy, and in January we finally heard some recognition from the ECB on the matter.

But, in a bizarre twist of events, that warning, which should be a Euro-positive given the potential for stronger rates in the economy, may actually be helping to bring some weakness into the single currency. We have yet to test the highs that came in on the morning of ECB, and since then we’ve seen a build of lower-highs coupled with fresh lower-lows; giving the price action appearance of a deeper short-side move. The relationship here would be one of global implications, where the European Central Bank starting to pull back on stimulus creates a bit of fear in risk markets around the world as we have another major Central Bank moving towards tighter policy. This has brought upon higher yields in US Treasuries, and those higher yields are creating fears around elevated valuations in the equity space. The ECB would join the Fed in their path of tightening policy, leaving only the Bank of Japan amongst the major Central Banks actively pushing QE into global markets without some type of taper or wind-down planned.

For risk markets, this implication can be big as the backdrop for corporates in the United States and Europe gets less friendly and a bit more unforgiving with higher rates and tighter policy. The relationship between Central Banks pulling back liquidity and tightening policy should not be dismissed as a negative for global equities that have ridden Central Bank easy-money policies for more than eight years to fresh all-time-highs.

Next week’s big data item out of the Euro-Zone is the preliminary read of 4th quarter GDP out of Europe. When we saw the advanced read on this data point two weeks ago, Euro strength came back after a quick trip to support following ECB. This data point helped to bring bulls back into play, and eventually we saw another test of 1.2500, which faltered while producing that lower-high. What really got markets’ attention was the fact that the Euro-Zone’s .6% Q4 GDP growth brought upon an annualized 2.7% growth rate, which beats what was seen in the US at 2.6% over the same period. Given that we’ve had five rate hikes from the Fed in the past few years while the ECB remains ‘pedal to the floor’ on QE with no moves of tightening yet seen, the European Central Bank may have some catching up to do if this global growth story is to continue. 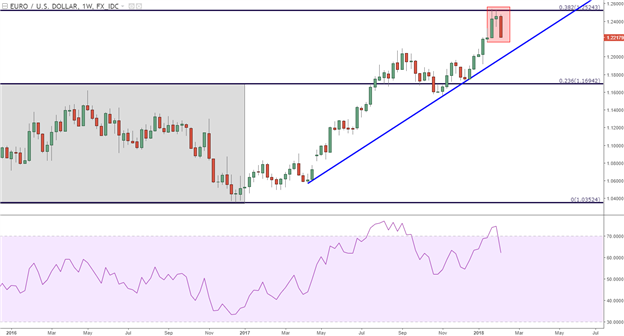 From a technical perspective, the weekly EUR/USD chart saw the first down-week since mid-December, while also producing an evening star reversal pattern off of a key level of resistance. The 38.2% Fibonacci retracement that you see in the chart below is derived from 2008-2017 major move, and this level has proven difficult to break for Euro-bulls since it first came into play on the morning of ECB. Evening stars will often show near the top of a trend, and this pattern may be preluding a deeper move-lower before the bigger-picture bullish theme may be ready for continuation.

The forecast on the Euro for next week will be set to bearish.

Are you looking for longer-term analysis on Euro? Our DailyFX Forecasts for Q1 have a section for each major currency, and we also offer a plethora of resources on our EUR/USD, EUR/JPY, EUR/GBP, and EUR/CHF pages. Traders can also stay up with near-term positioning via our IG Client Sentiment Indicator.