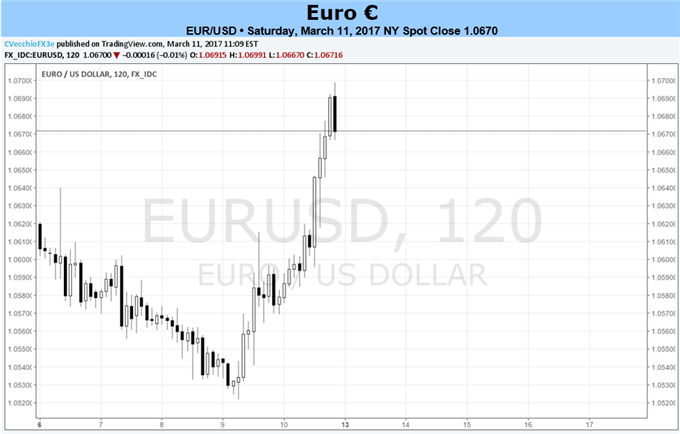 - Euro’s top fundamental risk appear to be fading fast as odds of a Marine Le Pen victory in the French presidential elections continues to fall.

- European Central Bank’s cautiously optimistic tone and refusal to re-up the TLTRO leads to steepening of yield curves across Europe, providing support for the single currency.

- More EUR/GBP, EUR/JPY, and EUR/USD strength could be on tap as the crowd continues to fade gains.

The Euro was easily the top performer last week, as the combination of a more optimistic European Central Bank and the odds of a Marine Le Pen victory in the French presidential elections falling have proven to knock down fundamental obstacles to further Euro gains. EUR/NZD was the top performing EUR-cross, gaining +2.01%, while EUR/GBP added +1.15%, and EUR/USD, the laggard, added +0.48%.

Starting with the ECB, it seems that they’ve taken notice of the generally improving economic conditions in the region, as we’ve discussed in this note for each of the past few weeks. ECB President Mario Draghi said that “risks of deflation have largely disappeared,” and that “the balance of risk regarding growth has improved.” In turn, the ECB upgraded their inflation and GDP forecasts for the region: its inflation forecasts improved for 2017 (+1.8% from +1.3% in December) and 2018 (+1.7% from +1.6% in December); and it increased its GDP forecasts for 2017 (+1.8% from +1.7% in December) and 2018 (+1.7% from +1.6% in December).

While the ECB did announce that it would continue as planned with its QE taper, down to €60 billion per month for the remainder of 2017 (which will add over half a trillion of government debt to its balance sheet), there was a comment in Draghi’s press conference that was rather illuminating. When asked about the language around interest rate levels, he said that the Governing Council had a “cursory discussion about whether to remove the word 'lower' from the forward guidance.”

This refers to the opening salvo of the ECB’s policy statement, “We continue to expect them to remain at present or lower levels for an extended period of time, and well past the horizon of our net asset purchases.” While the ECB isn’t going to hike rates while its continuing to expand its balance sheet, this word choice indicates that the ECB is slowly but surely moving to a less dovish policy stance. The steepening of yield curves across Europe, mainly in Germany and in France, as well as the Euro strength around the press conference, suggest that markets understood this cautiously optimistic, dovish-yet-slightly-hawkish tone seriously.

To underscore how confident the ECB’s Governing Council are on the improvement in conditions in the Euro-Zone, they decided not to extend another TLTRO (targeted longer-term refinancing operation), noting that “no member of the Governing Council felt the need to discuss a new TLTRO.” Backing away from such an extraordinary policy tool is a sign that the ECB feels the worst of the Euro-Zone debt crisis is in the rearview mirror. 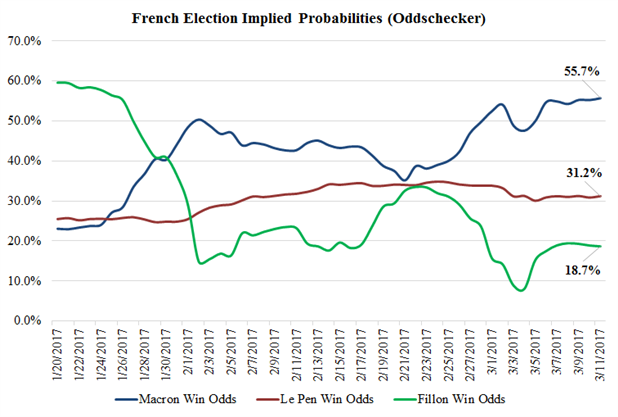 With the ECB starting to back away from the abyss, the Euro seems to stand to benefit. The other major hurdle in its way is, of course, the French presidential elections (the Dutch elections this coming Wednesday, even if the PVV party and Geert Wilders win the popular vote, won’t have much of an impact as they won’t be able to form a governing coalition). The French presidential election, as an existential risk that could ultimately lead to a ‘Frexit,’ seems to be fading, thanks to the National Front’s Marine Le Pen’s chances at winning stagnating.

As the centrist technocrat Emmanuel Macron’s odds of not only winning a second round runoff (May 7) against Le Pen are increasing, but also the likelihood that he will defeat Le Pen in the first round of elections (April 23) starting to increase as well, markets are slowly reducing any political risk premium weighing on the Euro. For the foreseeable future, speculation around the French presidential remains the most important driver of the Euro, and it’s starting to drive the Euro in a direction of further strength – regardless of the Federal Reserve hiking rates this coming Wednesday (just a bump in the road at this point in time). –CV