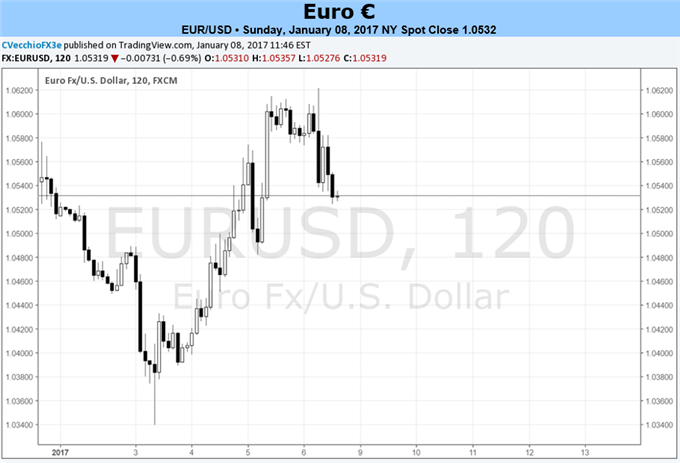 - Quiet economic calendar on both sides of the Atlantic keeps attention on US political developments surrounding President-elect Trump.

It was an exciting, but perhaps disappointing start to 2017 for EUR/USD. Despite setting a fresh 52-week low on January 3 at 1.0342, EUR/USD traded above 1.0600 by Friday; the wide range in prices through the first week of January only resulted in a meager +0.14% gain for the pair.

While early-week US Dollar weakness was widespread (profit taking on the Trump reflation trade, generally), the Euro itself was mixed amongst the rest of the major currencies. With commodity prices running up, EUR/CAD (-1.40%) and EUR/AUD (-1.15%) slipped back; EUR/GBP (+0.56%) edged higher on renewed Brexit concerns.

In the days ahead, amid a rather quiet economic docket for the Euro – November Euro-Zone Unemployment on Monday, 2016 German GDP and November Euro-Zone Industrial Production on Thursday are the highlights – more of the sideways churn that the Euro has seen in recent weeks seems very likely. Overarching political concerns will linger, especially about elections in the Netherlands, France, Germany, and Italy (likely at the end of the year, but no later than May 23, 2018). Political concerns for the Euro, are longer-term in nature and will simmer in the background for a while (certainly beyond the forecast horizon of this piece), a burden that will be more apparent at some times and less apparent at others.

In turn, a look at some of the Euro’s near-term fundamentals would be appropriate to help calibrate the short-term view. Starting with the ECB, markets believe the central bank is done easing, and by the end of 2017, will be closer to a rate hike (19.5% chance at the December 2017 meeting) than a rate cut (6.0%).

In the past, while the lack of dovish pricing represented opportunity for the ECB to surprise the market, this situation is now in a different context: in prior occurrences, energy prices were still heading lower and inflation expectations were in a downtrend. Yet now, energy prices are rising (Brent Oil is up from $54.33 to $57.21 over the past four-weeks) and inflation expectations (5-year, 5-year inflation swap forwards) are pushing higher (1.763% at the end of last week from 1.725% four-weeks ago).

Aside from markets feeling that Euro-Zone inflation is heading higher – which is implicitly bullish for the Euro – economic data has been improving steadily in recent weeks, beyond consensus expectations by a wide margin. The Euro-Zone Citi Economic Surprise Index finished last week at +71.1, up from +62.6 on December 9.

In the short-term, these are all reasons for markets to be less bearish on the Euro, despite the longer-term political concerns that will flare up from time-to-time throughout the year. This counterbalance leaves the Euro at the behest of significant movements in the other major currencies, like: whether or not the Trump reflation trade restarts after the surprising wage data in the latest US NFP report (EUR/USD); if markets will lose faith in Theresa May’s government and reprice a ‘hard Brexit’ (EUR/GBP); or if weakness in the Chinese Yuan becomes a forbearer of weakness in the Chinese economy, resulting in collateral damage to China’s largest regional trading partners like Australia and New Zealand (EUR/AUD and EUR/NZD). –CV