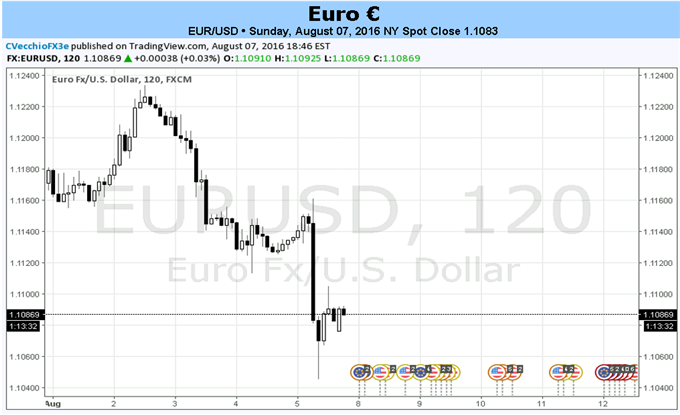 EUR/USD Ebbs and Flows, but Not Due to Euro Influences

- As Euro sentiment has improved, so too has confidence in the US Dollar.

- European data, market indicators ease off, but not significantly; calendar light ahead.

An exciting end to the week for EUR/USD masked an otherwise dull weak for the Euro complex, broadly speaking. After the dust settled around the numerous policy decisions from across the globe – the Reserve Bank of Australia’s ‘neutral’ rate cut, the Japanese government’s underwhelming stimulus plans, and the Bank of England’s rendition of throwing the kitchen sink at Brexit – there were no ‘eye-popping’ winners or losers. EUR/AUD slid the most, by -1.14%; EUR/JPY dipped by -1.03%; and EUR/GBP gained a mere +0.39%. Similarly, after a robust July US Nonfarm Payrolls report, EUR/USD eased off by -0.81%. Of the eight major currencies, the Euro ranked fifth on the totem pole; a middling performance overall.

With that said, there is little reason to think that the Euro, broadly speaking, will find direction over the coming week; exogenous influences (like central bank decisions abroad) will weigh heavily on individual pairs (like EUR/NZD, with the Reserve Bank of New Zealand on Thursday), but anything more would be unexpected. An assessment of the current conditions facing the Euro is necessary, then, if the coming days lack significant drivers. Certainly, a lack of progress or deterioration across key metrics further reinforces the idea that the Euro is somewhat ‘driver-less.’

Markets continue to not price in an ECB rate cut this year, with now a ~45% chance of a 10-bps rate cut by December 2016, per overnight index swaps. The recent dip in EUR/USD can be attributed not to the Euro’s, but the US Dollar’s rate expectations moving: post-NFPs, the first month the Fed is expected to raise rates was pulled forward from December 2017 to September 2017.

Elsewhere, inflation expectations for the Euro-Zone rose steady over the course of July before subsiding into week-end. The 5-year, 5-year inflation swap forwards, a market measure of inflation expectations, slipped back over the past week-plus, from 1.367% on July 27 to 1.333% on August 5 (although still well-above the yearly low of 1.250% on July 11). To an extent, this may be giveback after energy prices peaked in June; Brent Oil is down -16.3% from its June high. As such, something to monitor on the periphery this coming week for the Euro would be energy prices; a further decline may translate into weaker inflation expectations, which could burden the Euro and reignite expectations for an ECB rate cut this year.

Overall, economic conditions for the Euro-Zone remain stable, further underscoring the lack of near-term drivers. The Citi Economic Surprise Index for the Euro-Zone dropped to +28.2 by August 5, down from +28.3 a week earlier – barely changed overall. The Euro economic docket for the coming week is exceptionally light, even when factoring in Q2’16 Euro-Zone GDP and Q2’16 German GDP, both due out Friday; both are second readings and therefore carry much less significance. If EUR-crosses are volatile this week, it’s more likely than not due to the other, non-EUR component; if the Euro is in the driver’s seat, it probably won’t be for a good reason. –CV