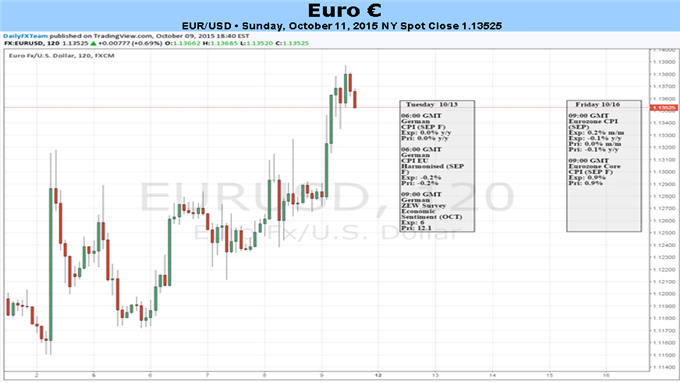 Euro Set to Respond to Policymakers' Speeches amid Thin Calendar

- Despite risk-sensitive EUR-crosses pulling back, EURUSD remains afloat thanks to the US Dollar.

It was another choppy week for the Euro, with losses stacking up against the commodity currencies once again through the first full week of October and Q4’15. EURAUD (-2.83%) and EURNZD (-2.67%) led the way lower, but it was EURJPY’s (+1.55%) and EURUSD’s (+1.25%) performances in context of the commodity complex that highlight the overall mood of the market: investors are dumping low yielding currencies in favor of higher yielding ones; risk appetite is improving.

Traders need to look no further than the recent FOMC minutes or the September US Nonfarm Payrolls report for reasons why traders are taking on more risk: the likelihood of the Federal Reserve raising rates in 2015 is rapidly shrinking. At the same time, amid slumping inflation expectations, traders are starting to ramp up expectations for the European Central Bank to step up its own easing measures.

In the days ahead, the market has a chance to refocus its attention on two of the major drivers of Euro weakness in 2015: persistently low inflation in the Euro-Zone; and the perceived difference between the monetary of the European Central Bank and the monetary policies applied by central banks around the globe.

Unfortunately for traders, the economic calendar for the Euro is quite thin this week (final measures of German and Euro-Zone inflation highlight an otherwise barren docket), so the upcoming slate of speeches will have to suffice. Over the next five days, there are seven ECB policymakers’ speeches, with three on Thursday alone. While policymakers have thus far been non-committal on further easing this year, they have at least suggested it is a possibility given recent market trends.

Overall, the big picture for the Euro remains unchanged, even as it continues to take shape: falling inflation expectations followed by falling nominal bond yields means investors are starting to shuffle into positions expecting the ECB to ease more. If the portfolio rebalancing channel effect is to take hold again, the next steps would be for the Euro to weaken alongside stronger European equity markets; the policymakers’ speeches this week should help clarify the ECB’s forthcoming moves.–CV